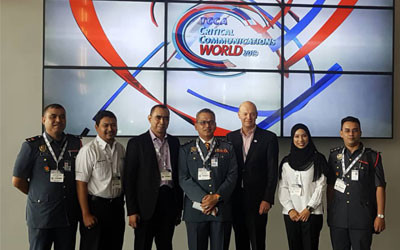 Since Kuala Lumpur is at the heart of one of the most vibrant critical communications markets in the world — the Far East, and in particular Southeast Asia — it was therefore a great opportunity for the industry and users to come together to absorb valuable learning in order to get ahead of the game for the coming year.

Presented by TCCA, CCW is a leading event for all stakeholders in mission- and business-critical communications looking for unparalleled access to authoritative content, up-to-the-minute policy, insight and intelligence alongside real-world case studies and best practice advice, combined with access to the latest technological innovations. This year’s event attracted more than 4000 visitors.

The vast scope of critical communications was reflected in the event’s masterclass and conference program, with contributions from industry experts across the spectrum. These included representatives from 3GPP, TCCA, manufacturers, integrators and national operators, as well as a range of vertical markets.

There was much conversation around the shift from narrowband to broadband. It’s clear that 4G and 5G — alongside other apparently game-changing technology such as AI and big data analysis — have the potential to revolutionise how we do business.

There was a great deal of innovation on show from many global manufacturers and integrators. In the exhibition hall there were more companies than last year (CCW 2018, Berlin), displaying portfolios of mission-critical communications solutions, new terminals (including a VHF TETRA terminal and base station), multimode terminals, hybrid solutions (LMR/LTE), gateways and repeaters, and AI-based video and control-and-command security solutions.

The ACCF was on hand to represent its members with an information booth, and a large space on the exhibition floor was occupied by Critical Communications Finland (CCF) — a conglomerate of agencies and manufacturers representing the innovation taking place in that part of the world.

The conference sessions covered a range of topics. Highlights included 3GPP Chair Georg Mayer reporting on the progress being made in relation to 3GPP standardisation of mission-critical features. He began by giving an update on the ongoing standardisation process, with Release 16 scheduled to be completed by March of next year and with work on Release 17 to start around the same time. The standardisation of 5G began with Release 15 several years ago, and in Mayer’s words it is now clear “what 5G will look like in the first deployment phases”.

The sessions also highlighted the ongoing global relevance of current open standard, narrowband technologies such as TETRA and P25. The innovation that is continuing with these technologies, the standards, real-life deployments, and significant investment in network and subscriber refreshes reaffirms confidence in the capability these systems are delivering.

The event also showed how users are embracing and exploiting the rich messaging/data and security capabilities of narrowband beyond just voice communications, while they consider augmentation with mission-critical broadband. 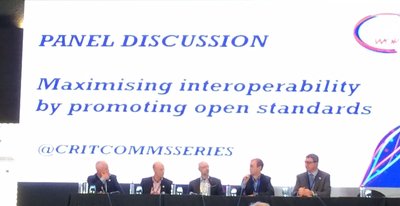 One of the many panel discussions at CCW. 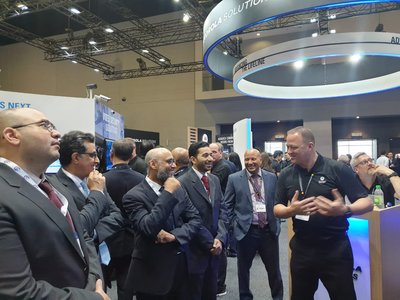 The Motorola Solutions display at CCW. 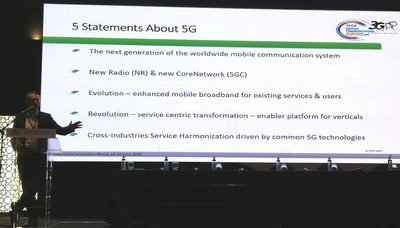 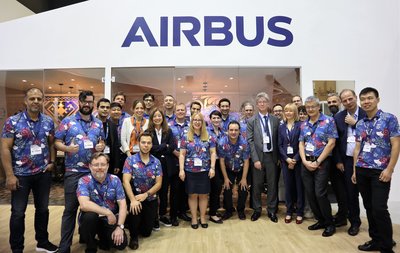 The Airbus team at CCW.

A series of presentations looked at specific national rollouts of critical communications. Malaysia, which currently provides first responders with nationwide TETRA coverage in the form of the SAPURA-developed Government Integrated Radio Network (GIRN), has embarked on efforts to improve the country’s connectivity through its national fibre and connectivity plan, a development which was announced in October 2018.

The Malaysia-focused presentations were followed by two more that dealt with specific national public safety communications systems. The first of these was delivered by the president of Germany’s BDBOS, Andreas Gegenfurtner. BDBOS is currently upgrading the German national PPDR TETRA network to its next phase, which will provide the migration of data and voice to broadband.

The second presentation was by Nina Myren from the Norwegian Directorate for Civil Protection (DSB), who discussed the situation in that country and Norway’s experience with roaming between national TETRA networks, with its own system (Nødnett) already linked with Sweden’s (Rakel) and Finland’s (VIRVE). She stated that “in the future, it is likely that all public safety [critical communications] services will run over commercial networks or in close cooperation with them. It allows the users to get experience with that future, which has great value for us but no big risk as we are not [swapping] Nødnett for something else.”

There was a real sense at CCW 2019 that the industry is taking future mission-critical communications technology seriously. Whereas in previous years this would have meant LTE — at least in the main — the disruptive technologies of today are now increasingly considered to be 5G, artificial intelligence and so on.

Masterclasses held during the event covered ‘TETRA Today and Tomorrow’, ‘Pushing the Boundaries of Innovation Across Transport, Utilities and Industry’, ‘The Global Flavour of Critical Broadband’ and ‘Critical Broadband Masterclass’. These classes provided a reality check in relation to mission-critical broadband terminals, highlighting the industry’s dependence on chipset manufacturers and where the interest in private broadband networks for non-public-safety verticals “may help stimulate a virtuous cycle of innovation that drives the industry forward”, as one participant put it.

Other masterclasses concentrated on exploring the broader strategic picture of different models for mission-critical networks and paths complimentary to, or as potential future replacements for, current narrowband digital technologies. For instance, dedicated, shared RAN with dedicated spectrum usage; shared RAN with dynamic spectrum usage; and secure MVNO — comprising LTE MCPTT/MCVideo, VoLTE, MBB and NB-IoT, and the second phase (in development) comprising the adoption of 5G New Radio for high and flexible capacity, along with URLLC (ultrareliable low-latency communications).

The ‘Insights into Malaysian and APAC critical communications’ masterclass was chaired by Kevin Graham, Director of the ACCF. In-depth discussion of mission-critical communications in the Asian region, along with case studies in key vertical markets (public sector, transport, energy, resources and industrial), was presented. 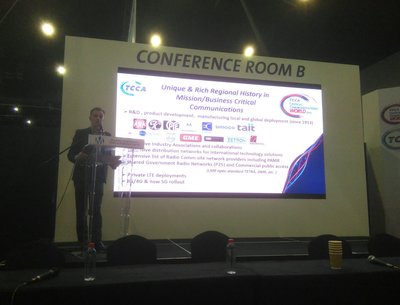 The ACCF will once again support the Comms Connect conference and exhibition in Melbourne, from 26–28 November 2019, by conducting an ACCF/TCCA workshop. The workshop will include presentations by local and international experts in standardised critical communications, including TETRA, P25, DMR and mission-critical broadband 4G, 5G and hybrid solutions.