Record attendance and a packed program ensured 2018’s Comms Connect Melbourne event was the best ever.

November’s Comms Connect Melbourne conference and exhibition has been rightly hailed as being the best, busiest and most bustling occasion of its kind staged so far in Australia. Delegate figures were way up on last year’s event, with all speaker sessions well attended and the exhibition floor buzzing (in fact, almost overflowing with people on the first day). This was clearly a response to the excellent speaker, panel and workshop program, as well as a packed expo with lots of new exhibitors for 2018.

There was a very large contingent of overseas visitors, with many leading members of the TCCA in attendance and a range of exhibitors on show at the Finland pavilion. This was the first time such a country pavilion had been tried at Comms Connect, and it was a wild success. Expect to see more of this in the years to come.

I tried to take in as much as I could, but of course with parallel sessions it was impossible to be everywhere at once. So what follows are some thoughts and impressions from some of sessions I did manage to attend.

If ever there was a practical example of the ways in which communications systems need to improve, the sad tale of the death of TJ Kennedy’s father in 2015 would have to be it. Kennedy’s father was exercising on a treadmill in the basement of his home, with his family members upstairs, when he suffered a cardiac event. Found breathless and pulseless by his wife, she called 911 and the emergency services responded. As Kennedy pointed out, those services were still using the same communications methods they had been using 30 years earlier. Although his father couldn’t be revived by the time emergency services arrived only minutes later, Kennedy pointed out that in 2018 his father could have been wearing a smartwatch “which would have notified emergency services that he was having a heart arrhythmia before he had the heart attack. It certainly would have told them, with fall detection, that he was down and needed help.”

This personal experience and many more throughout Kennedy’s career in public safety is what energised him during his time in charge at FirstNet, and contributed to how he and his team stayed focused on the main task at hand in order to expedite the network’s delivery. “My team will tell you that for about two years we only did two things at FirstNet — we conducted consultation with public safety and industry, and we created a procurement [plan] and executed on it,” he said. “Sometimes it’s really important to simplify what you’re doing so you can move quickly and do it well.” 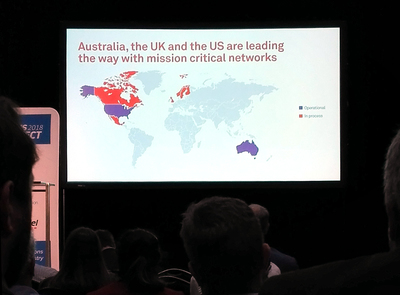 NSW Ambulance’s Geoff Waterhouse — the service’s Senior Project Manager for the Telecommunications Capital Works Infrastructure Upgrade Programme — gave a very interesting and heartfelt presentation on the value of network building, interjurisdictional cooperation and information sharing, as he related his experiences building ties with his interstate colleagues. “Keep your mind open, keep talking, don’t forget to discuss what others are doing, and just never, ever forget about asking those questions … because whoever you get to know, might have the answers to those questions,” he said.

Public safety mobile broadband was top of the bill for many of the presentations, with updates on the local situation given by Luke Brown (Emergency Management Australia, Department of Home Affairs) and European developments showcased by David Lund (Public Safety Communications–Europe).

EF Johnson’s Rudy Torres gave a particularly compelling insight into disaster recovery and communications resilience, as he recounted his company’s response to the devastation wrought by Hurricane Maria on the tiny island of Puerto Rico. He gave a comprehensive overview of the damage caused to elements of the island’s communications systems — some parts were wiped out, others were impaired, and others remained standing. The challenge was to rebuild in such as a way as to provide the most comms the most quickly — often in inhospitable terrain — while designing for more robust comms for the future. He particularly pointed out the importance of vendors being ready, willing and able to go above and beyond the normal call of duty to respond when need arises, which is precisely what EF Johnson (a JVCKENWOOD company), under Torres’ leadership, did. 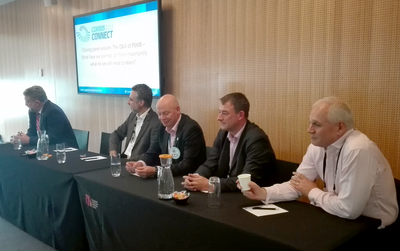 A highlight of the conference was the concluding panel discussion and Q&A session, which featured TJ Kennedy, Peter Clemons (Quixoticity), David Lund, Tero Pesonen (TCCA) and Duncan Swan (Mason Advisory). It is a testament to the quality and experience of the panel members, and the fields they represent, that the room was full for this very last session late in the afternoon of the final day. A wide-ranging discussion was held, with questions given over to the floor (in ABC Q&A style) and covering many public safety and technology issues. All present agreed that it was a very worthwhile discussion.

In conjunction with ARCIA, Comms Connect returns to Perth in 2019 with a great line-up of speakers and panel sessions. At the time of writing, the program had yet to be finalised, but keep an eye on the Comms Connect website (perth.comms-connect.com.au) for more details and sign up to the newsletter for regular updates.