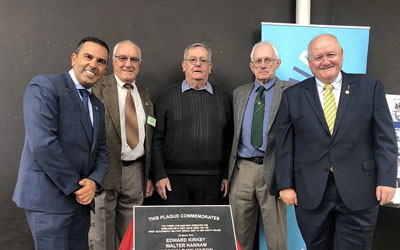 More than 100 years ago, civilian and army personnel combined to send the first military wireless signal in NSW.

Three civilians — Edward Kirkby, Walter Hannam and Reginald Wilkinson — have been honoured with a new plaque in Sydney’s south, recognising their involvement as the signallers who played an integral part in the first successful military wireless signal transmitted in NSW.

Sutherland Shire Council supported a grant application by the Shire Military History Club to secure NSW Government funding for the creation of the plaque, and co-hosted an unveiling event in late August.

Around 80 guests attended Veno Street Reserve in Heathcote for the unveiling of the commemorative by Sutherland Shire Mayor Councillor Carmelo Pesce, Member for Heathcote Lee Evans, representatives from the Shire Military History Club and a descendant of Edward Kirkby.

In 1910, the Australian Army experimented successfully with sending wireless signals from an overhanging rock ledge near Waterfall to a tent near Heathcote railway station. Prior to this, the Army used semaphore flags or Morse code by heliographs to send signals.

George Taylor, then a lieutenant in the Army Intelligence Corp, was interested in how technology could assist during war and was determined to prove the value of wireless signals in notifying troops of impending threats and enemy movements.

With no wireless skills himself, Taylor decided to call in the expertise of Kirkby, Hannam and Wilkinson to conduct the test during an annual artillery camp at Heathcote.

“Today is an important moment in our local history, where we can formally acknowledge the important role these three skilled civilians played in sending the first military wireless signal in NSW,” said Mayor Pesce.

“The hard work of these men will now be recognised, alongside Lieutenant Taylor, for many years to come and Council is proud to have supported this initiative of the Shire Military History Club and Kirkby family.”

The NSW Government provided $1800 to the Shire Military History Club as part of the 2018–19 Anzac Community Grants Program to assist with the production of the plaque.

Clive Baker, President of the Shire Military History Club, said the club was proud to help give recognition to everyone who was involved in this historical event.

“The addition to the current memorial to include recognition of the civilians involved in this event was raised by Brian Kirkby, a descendant of inventor Edward Kirkby, and the club supported the project by raising the extra costs required for the plaque,” Baker said.

“Our local members, including Frank Purvis and the late John Risebow, did significant research for this project and we would like to see more descriptive plaques for Sutherland Shire, to help residents recognise the local military history and the sacrifices made by our past residents.”

Comms Connect New Zealand is a must-attend event for everyone in business- and mission-critical...

Australia's delegation to the WRC-19 focused on advancing the nation's legitimate...

Motorola Solutions has been awarded a total of US$764.6 million in its trade secret theft and...