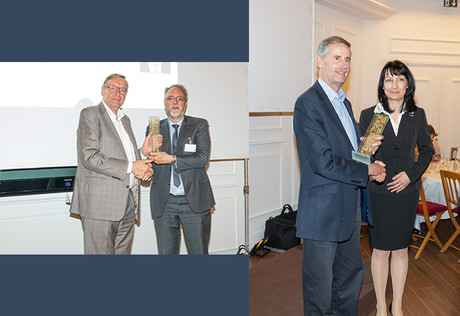 The 2019 ETSI Fellows have been revealed at the 73rd General Assembly dinner award ceremony.

Awards were granted to Roberto Macchi, David Chater-Lea and Friedhelm Hillebrand for their outstanding contribution to ETSI’s work.

“Our Fellowship program awards key contributors to ETSI’s work. We are really proud to be able to reward three individuals who have been instrumental in building ETSI’s reputation in technologies that are used around the world today,” said Luis Jorge Romero, the ETSI Director-General, in his opening speech.

Roberto Macchi has been involved in ETSI for more than 20 years in the fixed radio systems working group of the ETSI Technical Committee on Access, Terminals, Transmission and Multiplexing (TC ATTM) as an active member and a chairman. As an internationally recognised expert in fixed radio systems, he was also involved in interdisciplinary issues and interworking activities with ITU-R, CEPT or administrations. Thanks to his expertise, ETSI Harmonised Standards for fixed radio services and microwave point-to-point and point-to-multipoint systems are considered as the worldwide reference by non-European telecommunication authorities and microwave equipment manufacturers. Macchi currently works as a Standards and Regulations expert in SIAE Microelettronica.

David Chater-Lea has been a key member of the TETRA standards community since 1994, when he joined the ETSI group who designed the TETRA security standards. He has spent over 35 years of his career in mission-critical communications and has tirelessly supported the development of ETSI standards and needs of the industry in other standards bodies and industry fora. In ETSI TCCE, Chater-Lea is leading the effort to develop interoperability between TETRA and 3GPP standards so that the TETRA standards are ready in time for the user communities’ needs for interoperability between existing TETRA systems and users operating on 3GPP systems.

Friedhelm Hillebrand began his career at Deutsche Telekom. He became project manager for the German public packet switching network. From 1984 to 1992, Hillebrand and his team contributed to the GSM standard and led the implementation of Deutsche Telekom’s GSM network. Friedhelm chaired a working party for non-voice services of GSM. Notably, he proposed inclusion of SMS that would be supported by all networks and native on every mobile device. From 1996 to 2000 Hillebrand was chairman of ETSI’s Technical Committee SMG (Special Mobile Group), which included 11 subcommittees and 50 working groups. SMG elaborated the GSM evolution and the basic parameters of 3G, integrating contributions from partners around the globe. He successfully initiated the creation of 3GPP as future global standardisation body for mobile communication. Since 2004, he has provided consulting services concerning patents in mobile communication.

The ETSI Fellowship program rewards individuals who have made an outstanding personal contribution to ETSI, to building the work of ETSI or raising its reputation in specific sectors of standardisation. Any individual representative of an ETSI member may propose a candidate for an ETSI Fellowship. Fellowships are awarded each year by an award committee composed of the ETSI General Assembly Chairman and Vice-Chairmen, the ETSI Board Chairman and the ETSI Director-General.

Image caption: Fellows 2019 receiving their awards at the April GA.