TCCA Young Engineer of the Year to attend WE19 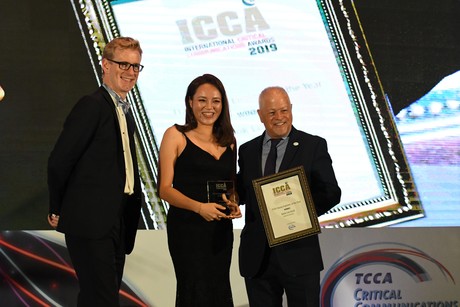 Koid, who is Motorola Solutions’ Senior Software Engineer, won the Young Engineer of the Year award for her technical achievements and strong leadership skills. TCCA said the award is given to individuals who “embody the skills, insight and inspirational personal qualities that will help drive critical mobile communications towards a further generation of success”.

Koid has since chosen to use her prize money to help her attend WE19, run by the Society of Women Engineers, in California this November. Her trip will also be supported by Motorola Solutions.

“I believe this will be a great networking opportunity and will enable me to listen and learn from experiences from women engineers around the world,” Koid said.

“A key part of my role at Motorola Solutions is to train and nurture new women engineers in the field and I am hopeful that this recognition will further encourage women to enter the engineering profession.”

TCCA Chief Executive Tony Gray said: “We are delighted that Angelene’s remarkable work has been recognised on the international stage.

“It is essential that new young talent becomes involved in critical communications and Angelene is an inspiration to anyone considering a career in engineering.”

Koid started her career under Motorola Solutions’ Graduate Training Programme in 2013. Initially placed in an established team developing Digital Mobile Radio (DMR), she was chosen as part of a new team to develop TETRA radios for the company. The TCCA said she’s been “instrumental” in helping the team grow from three support engineers to 120 — “reflecting not only her skills but the importance of TETRA technology”.

Koid is the technical lead and architect for several features in her team, including the Norway–Sweden common cross border feature that won the 2018 ICCA for Best Use of Critical Communications for Public Safety. She is the primary Subject Matter Expert in Mobility Management and Signalling, as well as the key liaison architect for Motorola Solutions Penang for standardisation and certification issues.

She is now recognised as one of the key software architects for the team — essentially governing the software processes to ensure the radio behaves as expected and has published several technical papers.

The TCCA said Koid’s career achievement so far is the “epitome of hard work and perseverance”.