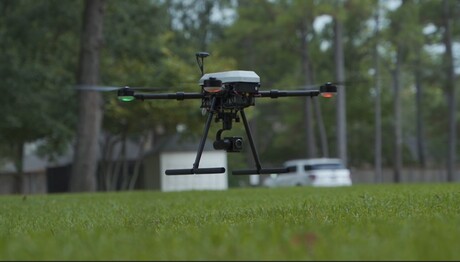 Flying a drone to an emergency scene gives first responders an opportunity to preplan before arrival.

Emergency response is a time-sensitive business. When fires burn or a driver crashes their car, seconds can mean the difference between saving lives and watching a situation spiral rapidly out of control. For fire and police departments, getting teams onsite can be challenging, what with the vagaries of traffic and bad routing. Houston-headquartered Paladin is a start-up business building a custom drone hardware and software solution for cities to be able to respond to emergencies faster and with better data for first responders. After years of development, the company has publicly unveiled its Knighthawk and Watchtower products.

The Knighthawk is a custom-made drone designed for the specific needs of emergency response personnel. It comes complete with two cameras: one 10x zoom optical and one thermal; they provide live video feeds on a developing situation, both day and night, with only a half second latency.

The drone has a time range of 55 minutes and can travel multiple miles away to reach a site, according to the company. Launch time can be as short as a few seconds from when a 911 call comes in.

To manage the drones and watch the video feeds, operators use the company’s proprietary Watchtower software to digitally place a pin on a map to direct the drone to the likely site of an emergency. Once there, uploaded video feeds will display in the app as well as in a 911 centre’s existing computer-aided dispatch systems. 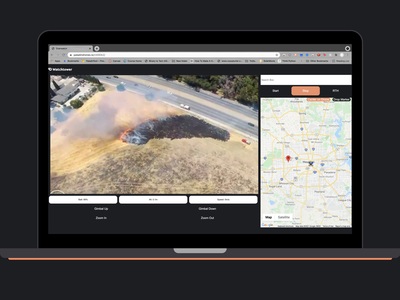 Responders can assess the situation before arrival using the Watchtower app.

Since the company’s founding in 2018, it has responded to about 1600 emergencies, according to its own internal data.

Installation is relatively simple, the drones can be placed anywhere in readiness for deployment, often stationed at a police department or firehouse. No special hardware or sensors or guidelines need to be installed in the city for the drones to process the terrain or understand their surroundings.

When a 911 call is received, the Knighthawk is autonomously dispatched to the location of the emergency. Upon arriving at the scene, the drone live streams its view of an emergency to first responders on the way, so they start planning immediately even before arriving on scene. There is a pilot on duty with full control of the UAV at all times through Watchtower. This pilot is certified by both the department and the FAA, and uses Watchtower to help control the drone, be aware of the airspace and, in general, conduct safe missions.

Each UAV may be limited according to local rules and regulations; unless another department or locale is requesting aid, whereby a commanding officer may approve the mission and override the protocols.

Coordination suffers when responders and connected things can't easily communicate with each...