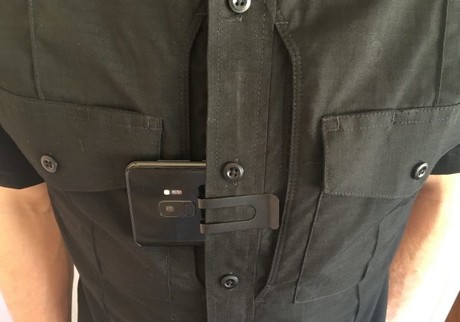 The smartphones, which come with FirstNet Certified Visual Labs software, operate as a communications device while also serving as a body camera and evidence documentation tool.

“With Samsung devices connected to the FirstNet dedicated public safety communications platform, the body camera footage captured via Visual Labs uploads automatically. Our officers don’t have to take any extra steps to connect — everything is streamlined.”

The Galaxy S9 has FirstNet Ready certification, meaning it can achieve priority and pre-emption both on the Band 14 FirstNet spectrum and across the full AT&T LTE spectrum portfolio — a feature that is now standard on all new premium Galaxy smartphones and tablets in the US.

Visual Labs enables officers to record from their devices and livestream directly to the command centre in real time. Visual Labs does not require docking stations or in-car routers and does not interfere with smartphone capabilities such as phone calls.

“The combination of software and hardware has made upgrading our officer mobility solution cost-effective and simple. It has truly transformed the way we do our jobs,” said Ridnour. “Instead of worrying about taking notes throughout a call, the devices allow officers to concentrate on the call itself, knowing that they can reference the footage later.”

Image of a Galaxy S9 used as body-worn camera for illustration purpose only. Courtesy Samsung.