DAMM on track with TetraFlex for transport 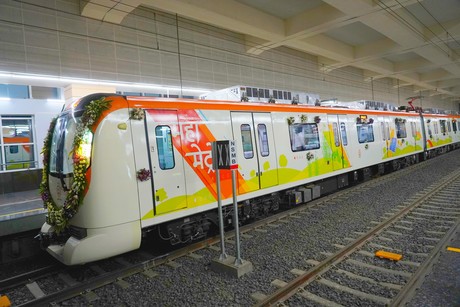 Rail operators across the globe are realising the benefits of open standards for their communications solutions.

DAMM has been enjoying substantial success in the rail communications segment lately, with its TetraFlex systems being chosen for transport solutions in many parts of the world. In March, the company announced that its systems partner, ErvoCom, had chosen DAMM TetraFlex infrastructure as part of its communication solution for the city tram lines in Cochabamba, Bolivia. The tram line will link a number of municipalities in the Department of Cochabamba, providing transport services to more than one million people. Key factors for choosing DAMM were the flexibility and scalability of the system combined with its open API, which enables easy integration of customised applications and external devices.

Eleven DAMM BS421 Outdoor Base Stations are being used for voice and data communication. And ErvoCom has used the open API to integrate its TRAin DISpatcher, TRADIS, and its TRS2090 Train Radio System. The TRS2090 will be used to transmit all voice and data for the passenger information, public announcement and emergency intercom systems to the operation control centre (OCC). TRADIS will enable efficient communication between the OCC and the train driver, passengers and service staff.

“By combining the high reliability of DAMM’s TETRA base stations and the innovation of ErvoCom’s Train Dispatcher, the customer benefits from a best-in-class communications solution.”

The rail projected was commissioned by Bolivia’s public works, services and housing ministry. ErvoCom is collaborating with Swiss-Spanish joint venture Joca-Molinari and BÄR Bahnsicherung to deliver the project, which was begun in August 2017 and is expected to be completed by August 2020.

Half a world away in India, the Maha Metro Rail Corporation has deployed a DAMM TetraFlex radio solution for its flagship Nagpur Metro Rail project. The solution covers 37 stations and two depots, as well as onboard equipment for 23, three-car trains.

Nagpur Metro is a rapid transit system being built in phases at an estimated cost of US$1.18 billion. Phase 1 comprises north-south and east-west corridors totalling 37 kilometres. Its first section, covering a distance of 13.5 kilometres, is now operational, with Narendra Modi, Prime Minister of India, performing the inauguration ceremony on 8 March 2019.

For Nagpur Metro, the major benefit of using the DAMM TetraFlex radio solution is its decentralised architecture, which ensures that there is no dependency on a central switching equipment for section-wise commissioning and operation of the system.

Because the DAMM TetraFlex solution is based on an open ETSI standard, Maha Metro Rail Corporation is also free to choose the devices that best suit its needs rather than being limited to particular brands and models. DAMM’s API makes it easy to integrate with other telecom systems such as telephony, external radio networks and central voice recording systems. Another benefit is that the solution provides for integration with signalling systems.

DAMM’s regional partner, Consort Digital, an established TETRA system integrator, is responsible for the delivery, project management and execution of the project. Consort Digital is an experienced integrator of mission- and business-critical voice and data solutions for professional users. It specialises in designing, provisioning and supporting radiocommunications solutions for mass transit customers such as mainline rail, metros, light rail and monorails.

“Nagpur Metro is a really exciting project for us,” said Carsten Laursen, Regional Director at DAMM. “Once again we have proved the superior quality and flexibility of our solution in the rail industry. With the professional work provided by Consort Digital we have also yet again demonstrated the strength of our systems partner network, which is core to our business.”