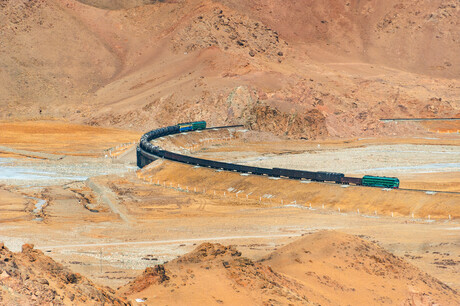 Teltronic is responsible for the deployment of a TETRA network that will serve the new railway corridor linking the Tavantolgoi coal mine, one of the largest untapped coking and thermal coal deposits in the world, with Gashuunsukhait border port, in southern Mongolia, on the border with China. The Tavantolgoi–Gashuunsukhait heavy haul railway line runs around 250 kilometres through the South Gobi Desert, Umnugobi province, Mongolia, so the equipment must withstand the most extreme conditions of that country.

Teltronic has installed a complete communications solution on TETRA digital technology based on its Nebula infrastructure, which includes two control nodes (main and redundant) as well as the indoor and outdoor base stations necessary to cover the 250 kilometres of the track and which will have to withstand the extreme temperature fluctuation of cold and hot, sandy, windy environmental conditions that occur in such a hostile environment as the Gobi of Mongolia.

In addition, the company has also supplied the on-board radios for each of the 16 locomotives that will serve the line, as well as the portable, mobile (installed in the maintenance vehicles) and desktop terminals used by control, security and maintenance personnel.

“Due to the environmental and operating conditions, we needed a robust and reliable radio system that would guarantee communications along the entire line without a single point of failure; Teltronic’s solution offered us the levels of availability and quality of service necessary to operate the line with total security,” said Bat-Amgalan Tumurbaatar, director of the telecommunication and signalling department of Bodi International LLC, the Mongolian railway infrastructure and mining company responsible for the project.

“Teltronic has a long history in the development of communication solutions for heavy haul mining railways, and the trust that Bodi International has placed in us only confirms the leading position that Teltronic has in the transport market, with comprehensive solutions that give us the ability to be a single supplier with extensive experience in the development of projects fully adapted to the needs of each client,” explained Teltronic’s Transport Business Development director, Felipe Sanjuán.

The Tavantolgoi–Gashuunsukhait line will be operated by the state-owned company Tavantolgoi Railway LLC and is expected to be a major boost to the Mongolian economy. The railway will run through the southernmost part of the country, along a 250 km route that includes a total of six passing sidings and two train stations, and will shorten travel time and transport costs, attracting road freight volumes to the railway. The line is expected to have a capacity of 30 million tonnes per year.

Offers flexibility for industries connecting assets as part of their digital transformation.