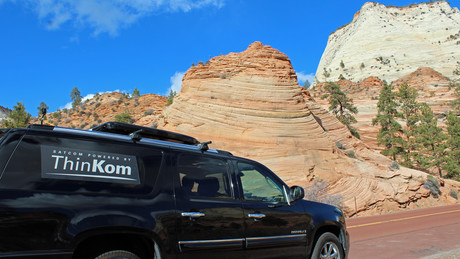 A US coast-to-coast demonstration of high-speed satellite communication links has been carried out by ThinKom Solutions and COMSAT.

The two organisations partnered up to complete an expedition that would test and validate a seamless end-to-end communication solution, in a moving vehicle and under a wide range of conditions.

The demonstration SUV was equipped with a roof-mounted ThinKom ThinSat 300 phased-array satellite antenna, plus a package of modems, routers, switches, power inverter and an easy-to-use operator interface inside the vehicle. COMSAT was responsible for providing seamless turnkey connectivity for the journey through commercial Ku-band satellites and redundant 3G/4G LTE terrestrial networks.

The ThinSat 300 antenna is just 4.3″ high and can be easily mounted on a standard roof rack. Total weight, including the radome, is 54 kg. Based on ThinKom’s patented phased-array technology, the vehicle-mounted antenna enables robust IP networks, streaming video and voice-over-IP applications without stopping to deploy a fixed satellite terminal or waiting for a blockage recovery.

During the expedition, ThinKom’s engineers conducted tests of the latest system software enhancements, which provide faster satellite acquisition and tracking, as well as additional modem interface protocols and modulation schemes. These improvements add up to greater operational efficiency and significant savings in time and money for end users, according to ThinKom.

The week-long trek took place 3–10 March. It started at Manhattan Beach, California, and ended in Washington, DC. The route included some of the most remote regions of the country, including Utah’s Bryce Canyon, Zion’s and Arches National Parks, Arapaho National Park in Colorado, the South Dakota Badlands, Great Plains, Daniel Boone National Park in Kentucky and the Outer Banks in the Carolinas.

“Importantly, the trip provided further validation of the efficiency of the ThinSat 300 antenna. The system delivered an average of 1:1 bit-to-hertz ratio on an extremely narrow MHz channel without spreading the signal. With other less-efficient antenna designs, this would have required substantially more bandwidth resulting in much higher operational costs.”

The satellite demo vehicle will be positioned in the Washington, DC, area for the next few months to conduct private demonstrations.