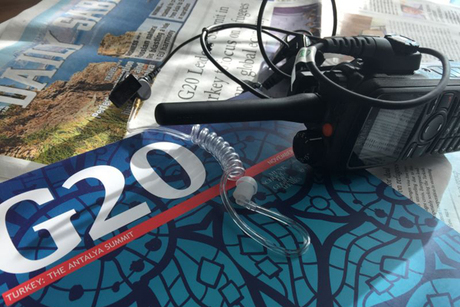 High-level security measures were in place for the 10th annual G20 Leaders Summit, including a customised two-way radio communications solution from Hytera.

The mobile radio communications provider said its customised solution included high-level encryption to ensure efficient and private communications for the security staff during the summit, which was held in Antalya, Turkey from 15–16 November.

Local authorities imposed a strict curfew in the south-western Turkish city and further elevated the level of security around the summit’s venue, Regnum Carya Hotel, as a rapid reaction to the terrorist attacks in France, which occurred on 13 November.

The company said its two-way radio communications solutions have been implemented in a number of other international conferences and events.

5G has confirmed its status as the fastest-growing wireless cellular technology, with connections...

The Leeds Bradford Airport will install the Freqentis VCS 3020X as it expands to accommodate 3...

The M2 Pathfinder, recently launched on behalf of the RAAF and UNSW, will help inform future...