Going back to the basics, Hytera engineers and designers have re-imagined the hardware platform and software architecture to further improve performance and user experience.

From audio engineers redefining noise cancellation algorithm software to improve voice audio clarity, through industrial designers redefining what professional radio users require in the handling of a radio, to structural engineers ensuring each unit withstands the rigours of whatever situation and conditions it is tasked to perform, the performance of each Hytera H Series radio optimises the user experience while being practical and easy to operate.

There are two handheld models in each H series handheld plus an H Series mobile radio. Each radio is more compact, lighter and delivers increased battery capacity and battery life.

Other innovations include using the vibration of the speaker to expel water through a specially designed cavity to ensure clear audio even in pouring rain. Direct mode communication range is extended by 25 per cent in open environments, while signal quality is improved at the edge of the network when in trunking mode.

Raising an alarm triggers top priority to other radios with a pre-programmed emergency mode, identifying the person issuing the alarm. A ‘man down’ feature will let others know if the radio has been tilted past a certain angle. This may happen for instance if the radio user has fallen over or is unconscious or injured. The alarm will be triggered after a warning is issued to the user.

Each radio is GPS-enabled and has Bluetooth wireless connectivity to audio devices to improve user experience.

The HP6 series has two models, the HP682 and HP602, specifically designed for business-critical users. While small and light and easily-pocketed, each model packs 20 hours of lithium polymer battery life in its IP67 waterproof casing built to military specifications. 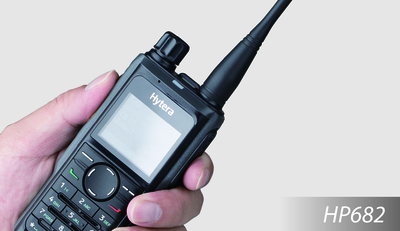 The HP7 Series comprises of the HP782 and the HP702 radios built to slightly more robust specification than the HP6 Series. Still relatively compact and light they each have higher milspec and waterproofing capability with a full 24 hour battery life. These radios are made for the tough industrial environment.

The HM782 mobile radio delivers similar performance enhancements as the portable terminals. The addition of an Ethernet port allows the radio to function as a gateway for narrowband networking, while also making it much easier to co-operate with outside third-parties and platforms.

Features include six programmable keys for customised operation, a five centimetre screen with a simple user interface and an accessory port and Ethernet port.

An improved case design greatly enhances heat dissipation for use in hot and humid environments.

The HM782 is also Hytera’s first DMR that can support the IP Transit Solution feature.

Finally, the HR1062 compact digital repeater completes the Hytera H Series line up. Reduced to half the size of the previous Hytera model, the repeater includes a telephone gateway, a router and a power adapter in its compact footprint.

It also features an internal AC power supply with DC battery back-up, an Ethernet port for access to IP networks, improved receiver sensitivity and comes with a 64 channel capacity.

Many Australian law enforcement agencies are looking to their counterparts overseas at ways to...

5G is changing the perception of wireless connectivity in the emergency services sector.