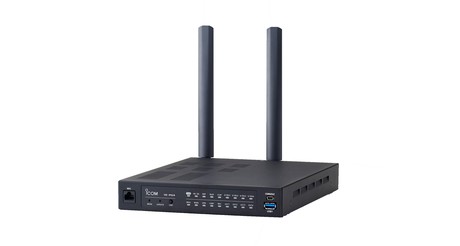 The VE-PG4 comes with the following features:

All in One Package

Call Recording to a USB Drive

Incoming/Outgoing calls can be recorded to an external USB device connected to the VE-PG4. Up to four recording settings are programmable. The recording call type is selectable from All, Group, and Individual calls. In addition, the Monitor function transfers the received audio data to an intended device.

Microphone Connection for Base Operation

Connect HM-241, optional speaker-microphone to the microphone connector on the VE-PG4’s front panel to enable simple base operation. Echo canceller and noise canceller functions are built-in for full-duplex communication with IP advanced radio system, like the IP100H or IP503H / IP501M.

GPS position and status information from the IP503H/IP501M LTE transceivers can be received and transferred to a PC to track the location of the radio users or a user in a vehicle.

The optional RC-FS10 remote communicator creates an IP-based virtual radio on a PC, and can communicate with land mobile radios, LTE radios, and IP communication terminals through the VE-PG4.

The Serial Pass-through function enables you to connect a serial device to the VE-PG4 to extend the communication range between the connected device and a controller PC. The virtual serial port software for Windows® PC is supplied with the VE-PG4.

The built-in simple SIP server enables you to assign IP phone numbers with extension groups. The VE-PG4 can be connected to external SIP server as a client. The following IP-PBX settings are programmable.

The VE-PG4 interconnects with two or more radio systems, even when the systems are using different bands and different categories. All received audio is bridged to opposing radio system, so a radio user can talk to all connected radio users. The built-in digital voice converter converts analog audio to IDAS™ compatible digital audio.

By installing a custom SIM card to the built-in LTE module, the VE-PG4 can interconnect IP501H/IP501M LTE transceivers with conventional radio systems and IP100H IP communication terminals. GPS position information from the LTE transceivers can be received and transferred to a PC.

With a VE-PG4 RoIP gateway, the IC-SAT100 can interconnect with an IP phone, IP, LTE, IDAS digital (Type-D multi-site trunking and conventional systems) and analog transceivers.

Two or more VE-PG4s can be connected through LAN or LTE (4G) and 3G networks. The communication area can be flexibly expanded, and dispersed radio sites can be connected, regardless of distance or radio system used.

The IC-SAT100 can be used in remote, isolated areas where there's no cellular coverage or...

A cost-effective, simple solution for events, festivals and large organisations, enhancing the...