Best of 2020: Australia and the WRC — seeking spectrum harmony 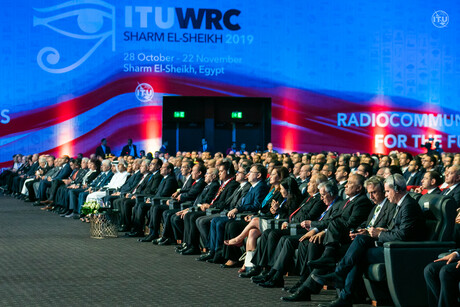 Australia’s delegation to the WRC-19 focused on advancing the nation’s legitimate interests in spectrum policy and technology matters.

WRC-19 was held from 28 October to 22 November 2019 in Sharm el-Sheikh, Egypt. More than 3000 state and industry delegates from 163 countries and 424 representatives of 130 organisations participated. Australia sent a delegation of 31 government and industry representatives, led by the then Department of Communications and the Arts.

Historically, Australian engagement in WRCs had been led by the Australian Communications and Media Authority (ACMA) as the WRC was considered to be a technical forum. While the WRC continues to be a technical forum, agendas are increasingly also covering policy matters. So in 2017, the federal government transferred responsibility for Australian engagement in the WRC to the Department, recognising that departments of state are better placed to respond to policy matters. The Department and ACMA still work closely together in preparing for WRCs, with the ACMA continuing to lead on technical matters.

The WRC-19 agenda spanned the mobile phone, satellite, aeronautical, maritime, scientific, defence and transport sectors. Agenda items typically consider whether particular RF spectrum can be shared without causing harmful interference. Each WRC also sets the agenda for the next WRC. The global telecommunications industry is closely engaged in the meeting, including mobile and satellite companies.

The head of Australia’s delegation to WRC-19 was departmental Assistant Secretary Cathy Rainsford.

“Australian radiocommunication experts from government and industry engage in international study groups of the ITU throughout the 3- to 4-year World Radiocommunication Conference cycle,” Rainsford said. “Experts also meet domestically to contribute to studies and prepare to represent Australia at international and Asia–Pacific preparatory meetings.” 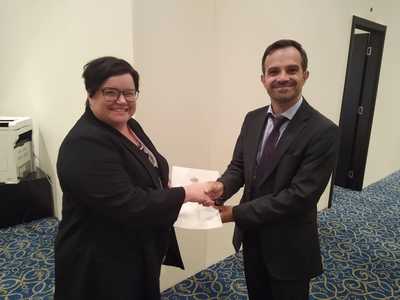 Head of the Australian WRC Delegation, Cathy Rainsford, submitting her credentials at the start of the WRC.

The Australian Preparatory Group for WRC-19 comprised about 50 experts and provided advice to government to inform decisions on Australia’s positions on each agenda item. The group included representatives from:

Membership of the Preparatory Group can change over time, with membership open to any interested party who agrees to guidelines for participation.

“These meetings review studies into issues on the WRC agenda to examine whether interference is likely to occur between radiocommunication services, and what technical and regulatory measures could be adopted to prevent or minimise harmful interference.

Based on the results of studies, the ITU Radiocommunication Sector develops a technical report (the Conference Preparatory Meeting report) providing options for possible adoption at WRC.

According to Rainsford, the “overarching objective for Australia at WRC-19 was to ensure that international arrangements through the Radio Regulations treaty continue to be consistent with the rational and efficient use of Australia’s sovereign assets in the radio frequency spectrum”.

Other Australian objectives were to:

2. Ensure continued protections for, and strengthening of international cooperation on, scientific uses of the spectrum including radioastronomy, meteorology, earth exploration and space weather monitoring.

3. Ensure continued protections for, and strengthening of international cooperation on, navigation and safety services, including aeronautical and maritime radiocommunications.

“Australia’s primary interests in the WRC-19 agenda were the evolution of 5G mobile broadband, connectivity on planes and ships, deployment of large satellite constellations, and scientific and transport safety uses of spectrum,” Rainsford said. 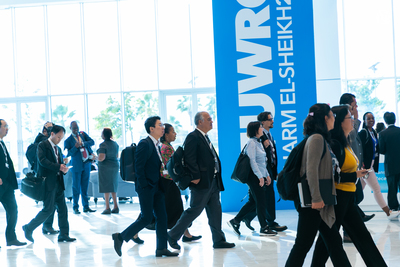 The conference agreed new global identification of spectrum for future use by 5G mobile broadband in the 24.25–27.5 GHz, 37–43.5 GHz and 66–71 GHz bands. Other bands between 45.5 and 48.2 GHz were also identified for mobile broadband use in some countries.

These identifications will provide large contiguous blocks of spectrum for deployment of 5G, promote economies of scale in 5G equipment development and manufacture, and enable service interoperability for international roaming.

Underpinning the agreement to identify spectrum for 5G were regulatory limits to protect meteorological satellite sensors from mobile broadband operating in the 24.25–27.5 GHz band. Going into WRC-19, there was consensus that protection was required, but significant contention on the level of protection.

The compromise outcome provides a staged approach. Between now and 2027, temporary interference limits will be applied to mobile broadband, becoming more stringent in 2027 when 5G rollouts reach maturity. 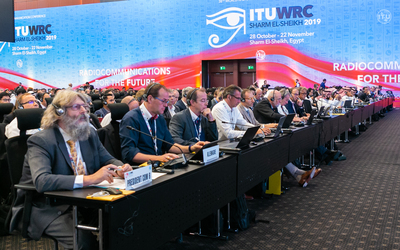 The need to address spectrum ‘warehousing’ in light of filings for new very large satellite constellations was addressed at WRC-19 by a new regulatory framework for the staged deployment of these constellations over a seven-year period.

The new rules provide a set of milestones for deployment to avoid large non-geostationary (NGSO) satellite systems (some up to 75,000 orbital slots) being filed with the ITU but never deployed, tying up these scarce resources indefinitely.

The outcome reflects Australia’s objectives and should promote a competitive global NGSO satellite industry and provide broadband around the world.

Broadband on aircraft and ships

The outcome includes regulatory limits to protect satellite and terrestrial radiocommunication systems, including 5G mobile broadband networks in 28 GHz being deployed in Korea, Japan and the US.

It is expected that the aviation and maritime industries will benefit from expanded service provision by satellite networks.

Australia successfully negotiated a result that supported ongoing studies on rail spectrum but avoided restrictions on any particular bands in the Radio Regulations. This outcome supports Australia’s rail industry to be able to continue using the specialised rail hardware that operates within current national mobile allocations.

The WRC outcome also aligns with the class licensing arrangements put in place by ACMA in the 5850–5925 MHz band in January 2018. 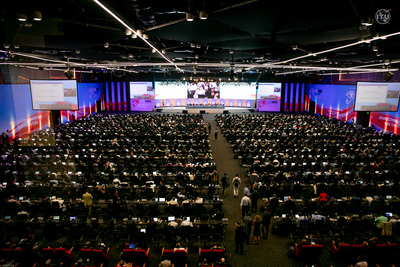 WRC-19 successfully paved the way for addition of the Iridium satellite system to the Global Maritime Distress and Safety System (GMDSS) as a second service provider, opening a monopoly previously held by Inmarsat. Iridium’s system will expand GMDSS capacity and coverage, especially in polar regions.

Early in the conference, agreement coalesced to develop a declaration Promoting Gender Equality, Equity and Parity in the ITU Radiocommunication Sector. At WRC-19, only 18% of participants were women — an increase of just 1% from WRC-15.

The declaration is a statement that ITU member states recognise that more is needed to facilitate the full participation of women in this space.

While Australia doesn’t have any particularly special domestic requirements that differ greatly from those of other countries, there are aspects for which we need to lobby at WRCs.

“Australia is lucky to enjoy a relatively low-interference environment, as we are an island nation with few neighbours close by. Our geography also means we rely on both terrestrial and satellite technology for communications, whereas some administrations are more reliant on one or the other,” she added.

“A key goal is to avoid international regulations that would constrain Australia’s ability to manage spectrum domestically, including to take advantage of our geographic isolation.

“We also support international cooperation as the best way to safeguard and improve important aeronautical and maritime communications, and to ensure scientific uses of spectrum can continue to supply important information (eg, meteorological sensor data) to Australia.” 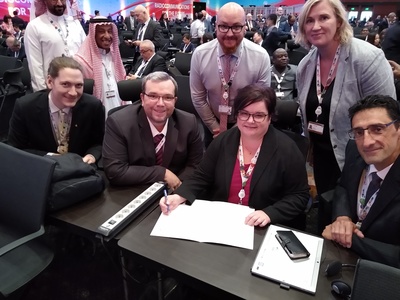 Cathy Rainsford and members of the Australian Delegation to WRC-19, signing the final acts at the conclusion of the conference.

Spectrum and satellite orbits are scarce resources, naturally limited in availability, and there is inevitable competition among major manufacturers and technologies vying for access to spectrum.

“With the rise of mobile phones over the last three decades, more and more spectrum has been sought to underpin high-speed mobile broadband and communications. At the same time, consumers and industry are demanding connectivity everywhere, which drives demand for spectrum from the satellite industry,” Rainsford said.

“The international radiocommunication community continues to recognise that cooperation and compromise delivers better outcomes (more spectrum and less interference) for everyone,” she added.

“Australia encourages cooperation and compromise on the international radiocommunications stage. While demand is increasing, improvements in technology mean that spectrum can be used more efficiently, and makes viable the use of spectrum at higher frequencies.”

What are some of the next big challenges for international spectrum regulation?

“Australia will continue to work towards international arrangements that provide certainty for interference management and flexibility to allocate spectrum efficiently, to its highest value use,” Rainsford said.

“Technologies using wireless connectivity, and spectrum that underpins it, continue to evolve. Spectrum needs to be managed for both new entrants and existing users.

“Increasing the efficiency of spectrum use, including through spectrum sharing, is likely to require continued international cooperation.”

Looking ahead to WRC-23

The conference agreed an agenda for the next WRC in 2023, comprising 19 agenda items and two areas for study.

The scientific community will explore use of extremely high frequencies to support Earth exploration satellite services in 231.5–252 GHz, and an upgrade of the status of the space research service in 14.8–15.35 GHz.

This article was first published on 19 February 2020