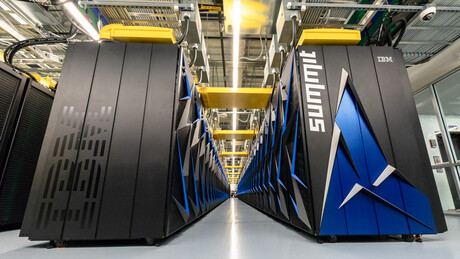 A team preparing for the billion-dollar SKA radio telescope reached the shortlist for ‘Nobel Prize of supercomputing’.

An international team led by The University of Western Australia was one of six finalists for the prestigious Gordon Bell Prize for outstanding achievement in high-performance computing.

The group was shortlisted for the award — commonly referred to as the ‘Nobel Prize of supercomputing’ — for their work developing data pipelines for the future Square Kilometre Array (SKA) radio telescope and testing them on the Summit supercomputer.

The team used Summit — the world’s fastest supercomputer at the time — to process simulated observations of the early Universe ahead of the radio telescope being built in Western Australia and South Africa.

International Centre for Radio Astronomy Research (ICRAR) Director of Data Intensive Astronomy Professor Andreas Wicenec, who is based at UWA, said construction of the billion-dollar SKA project was expected to begin next year.

“The low-frequency part of the telescope alone is set to have more than 130,000 antennas in its initial phase, generating around 550 gigabytes of data every second.”

To process data on this scale, Professor Wicenec said the team used a cluster of 4560 computers, featuring 27,360 high-end GPUs and 191,520 CPU cores.

“The highest writing data rate we achieved was 925 GB a second, and the effective throughput of the complete simulation was about a factor of two better than what is required by the SKA.” 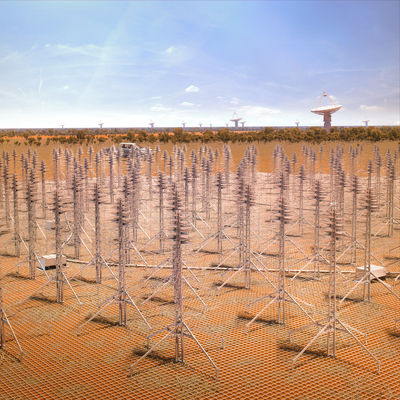 Close-up artist rendition of the SKA-Low aperture array and ASKAP dishes in Australia. The dipole antennas, which will number in their hundreds of thousands, will survey the radio sky at frequencies as low at 50 MHz. Credit SKAO.

Professor Wicenec said the team was surprised but thrilled to be a finalist in the Gordon Bell Prize.

“I didn’t expect it at all given the calibre of previous winners and the highly sophisticated nature of their projects,” he said.

“We didn’t have the Gordon Bell Prize in mind when we set out to do this work, so it’s fantastic to be recognised for the remarkable performance the multinational team achieved.”

The ACM Gordon Bell Prize was established in the 1980s with a nominal $100 prize for anyone who could overcome Amdahl’s Law and demonstrate that parallel computing made sense.

Today, the prize continues to track the progress of parallel computing, while rewarding innovation in applying high-performance computing to science, engineering and large-scale data analytics.

In previous years, finalists have presented their work in person ahead of an award ceremony at the annual SC supercomputing conference.

In 2020, the conference and award ceremony were held virtually, with the prize ultimately awarded to a nine-member team, drawn from Chinese and American institutions, for their project, ‘Pushing the limit of molecular dynamics with ab initio accuracy to 100 million atoms with machine learning’.

A critical piece of comms equipment will be reduced to chip size using a combination of...