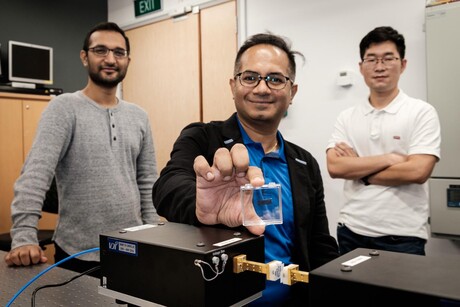 A breakthrough in electronic design has enabled the cracking of the hitherto theoretical limit of 10 Gbps for 5G wireless communications.

Published recently in Nature Photonics, the researchers showed that their chip can transmit terahertz (THz) waves resulting in a data rate of 11 Gbps, which is capable of supporting real-time streaming of 4K high-definition video and exceeds the hitherto theoretical limit of 10 Gbps for 5G wireless communications.

However, fundamental challenges need to be tackled before THz waves could be used reliably in telecommunications. Two of the biggest issues are the material defects and transmission error rates found in conventional waveguides such as crystals or hollow cables.

These issues have been overcome using photonic topological insulators (PTI), which enable light waves to be conducted on the surface and edges of the insulators, akin to a train following railway tracks, rather than through the material.

When light travels along photonic topological insulators, it can be redirected around sharp corners and its flow will resist being disturbed by material imperfections.

By designing a small silicon chip with rows of triangular holes, with small triangles pointing in the opposite direction to larger triangles, light waves become ‘topologically protected’.

This all-silicon chip demonstrated it could transmit signals error-free while routing THz waves around 10 sharp corners at a rate of 11 gigabits per second, bypassing any material defects that may have been introduced in the silicon manufacturing process.

The leader of the project, NTU Associate Professor Ranjan Singh, said this was the first time that PTIs have been realised in the terahertz spectral region, which proves the previously theoretical concept is feasible in real life.

Their discovery could pave the way for more PTI THz interconnects — structures that connect various components in a circuit — to be integrated into wireless communication devices, to give the next-generation ‘6G’ communications an unprecedented terabytes-per-second speed (10 to 100 times faster than 5G) in future.

“By employing THz technology, it can potentially boost intra-chip and inter-chip communication to support artificial intelligence and cloud-based technologies, such as interconnected self-driving cars, which will need to transmit data quickly to other nearby cars and infrastructure to navigate better and also to avoid accidents.”

This project took the NTU team and their collaborators led by Professor Masayuki Fujita at Osaka University two years of design, fabrication and testing.

Prof Singh believes that by designing and producing a miniaturised platform using current silicon manufacturing processes, their new high-speed THz interconnect chip will be easily integrated into electronic and photonic circuit designs and will help the widespread adoption of THz in future.

Areas of potential application for THz interconnect technology will include data centres, IoT devices, massive multicore CPUs (computing chips) and long-range communications, including telecommunications and wireless communication such as Wi-Fi.

The new standard will replace ARPANSA's existing standard and is based on guidelines from the...

What does 'lifetime warranty' mean for electrical equipment?