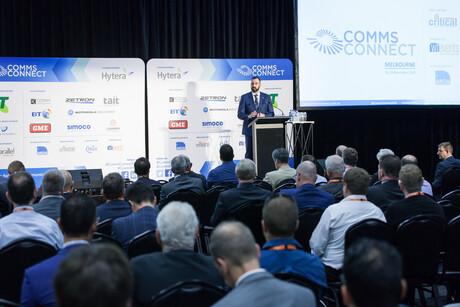 It was heartening to see a successful live Comms Connect NZ last month in Wellington, and the program is filling up with headline speakers and other highlights for Comms Connect Melbourne, to be held at the MCEC, 19–21 October.

Headlining day one will be respected Commissioner Shane Fitzsimmons from Resilience NSW, discussing the future of emergency and disaster management. The opening keynote will be followed by an update from the USA’s FirstNet CEO, Ed Parkinson, regarding the rollout of its First Responder Network.

Also featuring on day one is a ‘State of the industry’ leadership panel with the heads of ARCIA and ACCF/TCCA being joined on stage by public safety and critical comms leaders, plus public sector key players. Discussion will focus on the future of the critical comms and public safety sectors in Australia and the region.

The program will also include a ‘Black Spots’ panel session moderated by Scott Leyonhjelm of Nova Systems. A similar Comms Connect Virtual webinar last year saw a strong attendance at the live streamed event. Overall there are currently 18 speakers confirmed with more being added each week; check the full list here.

Other confirmed program highlights include:​

If you are interested in becoming a part of Comms Connect as a sponsor or exhibitor, contact Narelle Granger: ngranger@wfmedia.com.au.

For speaking submissions, contact Mara Gonzales with a topic/speaker/abstract: mgonzales@wfmedia.com.au.