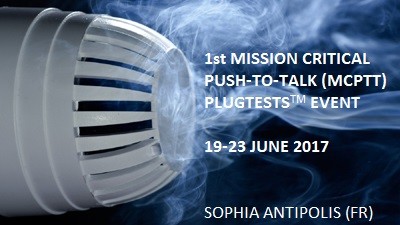 In partnership with the TCCA, and supported by the European Commission, the ETSI Mission Critical Push to Talk (MCPTT) Plugtests event is the first step towards ensuring that equipment from different vendors designed to support mission-critical users will work together.

It will be the first time that the interoperability of MCPTT products and services has been tested in Europe.

To ensure that PTT is built in to LTE services, 3GPP has been catalysed by the work of the TCCA to ensure that LTE supports mission-critical communications, with MCPTT now specified in 3GPP Release 13.

The goal of the MCPTT Plugtests event is to validate the interoperability of different solutions using various scenarios and test cases.

All major players offering standards-based solutions within the MCPTT ecosystem have joined the event.

The tests will be based on 3GPP, ETSI and IETF standards, and are designed to trial independently and jointly all components of the MCPTT communication chain such as Group Call, Floor Control, Unicast and Multicast communication.

To ensure the event runs smoothly, the ETSI Centre for Testing and Interoperability organised pre-testing sessions for about six weeks with 20 vendors. More than 100 combinations between the different participating companies will have been tested by the end of the event.

The test specification includes 45 test cases and will be available after the event.

Interoperability and MCPTT service harmonisation are critical challenges to be taken into account for the successful deployment and operation of mission-critical communication over LTE.

The first ETSI Plugtests event took place in 1999. Since then they have proved a valuable tool in the development of global standards.

Plugtests events serve two main purposes: they provide essential feedback to our technical committees to help ETSI improve standards and to accelerate the standards-making process, and they enable engineers to get together to test the interoperability of their implementations — which can reduce a product’s time to market.