Best of 2019: AML — a game changer for emergency services 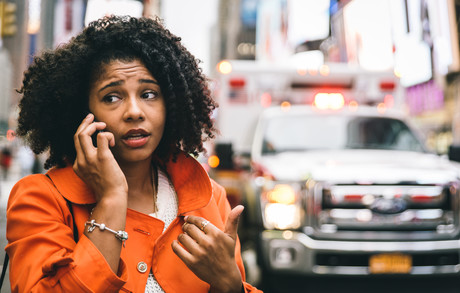 Every second counts in an emergency. As response time is key to determining a successful outcome, emergency services must act rapidly and make the most efficient use of their resources. And the work of these professionals relies on the primary information they can gather from the incident itself, location being key.

Oftentimes though, a person in need of assistance will not be aware of their whereabouts, being unfamiliar with their surroundings or simply distressed at the situation they find themselves in. How can emergency services know where and how to focus their efforts? That is when Advanced Mobile Location comes into play to provide a life-saving solution.

Your phone could save your life

Advanced Mobile Location enables a smartphone to identify when a call is placed to an emergency number. It then activates the phone’s location and sends it as an encoded, free of charge, SMS to the emergency services before turning the location off again. This SMS includes information on the caller’s latitude, longitude, time of positioning, level of confidence and positioning method (Global Navigation Satellite System, or Wi-Fi in certain cases). By being able to access the handset’s location, the information shared with emergency services is up to 3000 times more accurate than traditional systems, such as network location.

How can this technology be integrated into our phones? It already is.

AML is not an application, but an element that is part of a smartphone’s operating system, just like the code that runs the alarm clock, or the one that enables calls. It was first integrated into Android phones, as the Emergency Location Service (ELS) in July 2016, and was followed by phones running on Apple’s iOS in 2018. The prevalence of both these operating systems for smartphones means that almost all devices worldwide are capable of sending accurate caller location in case of an emergency.

But even though the technology enabling this information to be shared is widespread and already available, emergency services need to be capable of receiving it. For AML to be operational in a country, operating system providers will activate the technology once the national authorities are technically and operationally ready.

In this process, corresponding authorities need to establish different configurations such as the emergency numbers for which AML will be activated, the transmission channel, the time delta to receive an SMS, whether it is available when roaming and whether it will also be activated for SMS-to-emergency number services (or equivalent accessibility services).

AML has not only proven to be easy to implement due to its low economic and resource-related costs, but also brings in a considerable turnover as it allows for more effective management of often costly emergency resources. A study conducted in 2016 by an independent consultancy estimated that if AML were to be fully implemented in all European Union member states, the results over a period of only 10 years would result in costs savings of €95 billion, with an estimated 7500-plus lives saved.

Success stories soon came to light in these countries, as emergency services became able to locate citizens in distress in remote areas, tourists unfamiliar with their surroundings, victims of accidents and vulnerable sectors of the population with learning difficulties, and bridging communication gaps in multilingual countries. AML even assists with regular issues related to emergency response, such as calls dropping. In Ireland, a fire was reported by a bystander, but the call dropped before they could specify the address. However, the call taker was able to register the exact house number and street thanks to AML — an address that did not even figure in fire-mapping records yet, as it was a new construction.

AML can also enable little heroes, as it is not uncommon that children would call for assistance but be unaware of their exact location. In Estonia, emergency services once received a call from children in a small town in Estonia alerting of a potential house fire. They were able to provide their street name and flat number, but not the house number — which the call-taker was able to gather thanks to AML, quickly dispatching emergency services.

Last April, the Austrian Notruf Niederösterreich centre’s remarkable rescue of a paraglider was awarded at the 112 Awards Ceremony held in Dubrovnik, Croatia. Paraglider Andreas Gremmel crashed in a remote, alpine area of Austria and found himself severely injured and unaware of his location. A weak mobile reception also made it impossible for emergency services to call him back to gather more information about the accident. Thanks to AML, the emergency response team was able to locate Andreas within a six-metre radius, immediately launching a successful rescue mission that lasted only 50 minutes.

AML is not exclusive to Europe. In July 2019, Mexico joined New Zealand, Iceland, the United Arab Emirates and the United States in embracing the technology.

While Australia is expecting to deploy AML by 2020, New Zealand has benefited from it since May 2017.

Shortly after deployment, we at the European Emergency Number Association (EENA) spoke with Ben Quay, Programme Director at New Zealand’s Ministry of Business, Innovation and Employment (MBIE), who commented on the decision to move away from apps to AML: “The problems we were seeing with apps were that people weren’t downloading them or they weren’t using them in an emergency — apps added a lot of complexity for users.”

The first country outside Europe to deploy AML, New Zealand provides this service all over its territory as a free message for the caller, with a time delta defined to receive AML positions of 25 seconds (which also applies to SMS-to-emergency number).

Examples of successful implementation include two remarkable dispatches by Wellington Free Ambulance, which once received a call from a man who had woken up on the side of the road, with no idea where he was or what had happened. The man had a history of seizures and had been driving from Bulls to Whanganui. The only details he could provide about his location were that he was in a farmland area and that there were no houses or road signs. Wellington Free Ambulance used the system to identify the man’s location and provided him with the help he needed.

On another occasion, they received a call from a non-English speaker who hung up before an interpreter could be arranged. While the call-taker was attempting to call back, AML enabled identification of the location and help was immediately dispatched, as the person turned out to be in urgent need of medical treatment.

In another case, New Zealand police received a call from a person having suicidal thoughts. The only information that the call-taker could get while speaking with the person was that the caller was next to a train station without knowing which one exactly. Thanks to AML, emergency services obtained a very accurate location information (down to a four-metre radius) and found that the caller was on the rail tracks. Train control was immediately alerted, and police was dispatched on site to save the person.

AML in New Zealand in numbers

What is next to come?

Currently, AML is fully deployed in 18 countries all over the world. And, as the new European Electronic Communications Code has made AML implementation mandatory in all Member States by December 2020 and for all smartphones sold in the EU as of February 2022 to enable AML, more and more countries are mobilising towards activating this life-saving feature.

AML has come a long way in five years, from conceptualisation to its increasing deployment all over the world, and we can only expect that more lives will continue to be saved as the technology further spreads. At EENA, we fully support and encourage national governments to take the necessary steps to assure a more efficient emergency response, with the potential to save not only resources but also countless lives.

*Beatriz Peon works as PR & Communications Manager at EENA, a Brussels-based NGO with the mission to contribute to improving the safety and security of people in Europe and beyond.

While there is a need for everyone to embrace new technology, we must also have a strong...

Australian telecommunications operators are working to restore networks in bushfire-affected...

Students say IT education most relevant for future jobs

Copper thieves to be caught on camera