Senior 3GPP representatives have briefed Australian experts on the development of standards for critical communications.

Last week, members of the 3GPP leadership collaborated with the University of Melbourne’s Centre for Disaster Management and Public Safety (CDMPS) to provide a briefing to representatives from Australian government, industry and academia on how the 3GPP ecosystem works.

The briefing covered progress to provide the interface standards essential to achieving interoperability and mobility through the continuous development of applications across a broad range of sectors.

At the same event, the CDMPS provided a briefing on the development of a Blue Print Framework for the United Nations Sustainable Development Goals (SDGs). The framework was formally launched at the ‘A Safe Sustainable Futures For All’ (SSF) symposium being held this week.

The SSF symposium saw academics from around the world, together with representatives from the World Bank, converge on the university to discuss enhancing resilience in a changing landscape.

The CDMPS is working to identify how critical communications infrastructure and services contribute to the social and economic outcomes established by the SDGs.

The 3GPP event provided the opportunity for Luke Brown, Assistant Secretary for Emergency Management Australia in the Department of Home Affairs, to provide information about the next step in procuring a public safety mobile broadband (PSMB) capability for use by Australia’s public safety and security agencies.

That next step will see the establishment of a pilot network to trial the specific requirements of a PSMB capability identified through the received responses to the RFI issued late in 2017.

In providing the update, Brown said that collaboration between the Commonwealth and state and territory departments on the PSMB had been strong, enabling Australia to catch up to the rest of the world. He acknowledged the role the CDMPS had played in helping to achieve this position. 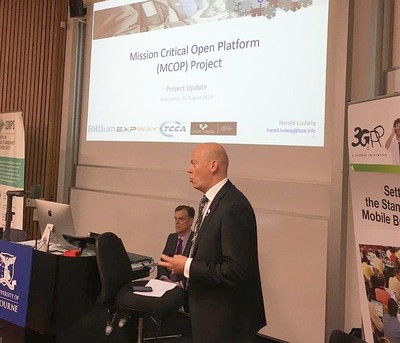 TCCA Director Tero Pesonen speaking at the 3GPP briefing at the University of Melbourne. 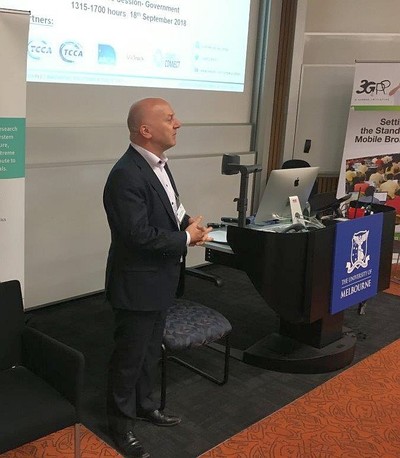 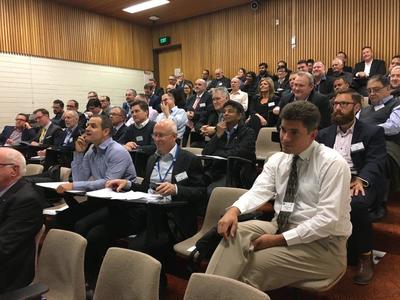 An audience of around 70 people attended the briefing.

Also covered were the radio aspects of the evolution of LTE-Advanced to 5G for mission-critical use, and what critical broadband will mean to government and industry through the transition from critical narrowband to critical broadband (including the use of hybrid solutions).

Importantly, the 3GPP presentations highlighted that narrowband land mobile radio will exist for many years, emphasising the critical work being done by 3GPP on the interworking between LMR and LTE and the need for ongoing investment by governments.

In discussion about potential hybrid models, much interest was shown in network roaming and network slicing. The complexity of this capability will require the use of artificial intelligence to provide the flexibility in services that users will require of mobile networks and their operators.

The 3GPP representatives emphasised the need for open standards and the risks associated with adoption of pre-standard applications.

Most importantly, they highlighted that the needs of particular sectors (such as public safety communications) may well be leveraged from work done for other sectors (such as automotive and the development of interface standards for driverless vehicles).

The 3GPP leadership indicated that it will continue its outreach to Australia, suggesting the need for the formation of industry communities of interest that can legitimately influence the work being done by the 3GPP through the production of evidence-based use cases, and the need for research activities to support these communities.

The 3GPP outreach will continue at the Comms Connect conference in Melbourne in November 2018.