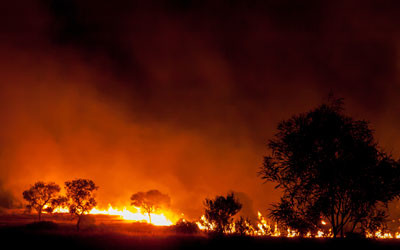 A consortium of Australian and international organisations involved in mission-critical communications and crisis management has made a joint submission to the Royal Commission into Australia’s National Natural Disaster Arrangements, outlining steps that should be taken to improve disaster preparedness and resilience.

The Royal Commission, informally known as the ‘Bushfires’ Royal Commission, was established on 20 February 2020 in response to the extreme 2019–20 summer bushfire season and the resulting loss of life and property, and environmental devastation.

The joint submission was prepared by the following bodies:

The submission — the lead author of which is Geoff Spring from the CDMPS — is one of more than 1400 that were received by the Royal Commission by the closing date of 28 April.

The group outlines what it describes and defines as the mission-critical, public safety communications ‘Ecosystem’, which is comprised of a number of interlocking components:

Importantly, it makes the point that the Ecosystem is underpinned by a vigorous supply chain and firm international standards.

The joint submission points out that many matters of current concern are, in fact, nothing new, and that previous governmental reviews, studies and inquiries have touched upon them. Indeed, certain government committee recommendations from the not too distant past, concerning communications being treated as critical national infrastructure, appear to have gone nowhere.

The submission recommends that the federal government:

The submission goes on to outline some of the overlapping complexities of the national policy environment within Australia’s federal system. State and territory departments and ministers are brought together within the Council of Australian Governments (COAG), and there are currently five federal ministers responsible for different aspects of the Ecosystem (eg, the Minister for Communication and the Arts, the Minister for Emergency Management and so on).

The submission then goes on to detail some of the many technological and policy matters of relevance to the Ecosystem, all of which have been investigated to one degree or another by governments over the past decade or so. Some of them remain either unfulfilled or are works in progress. They include:

Australia also has a National Disaster Risk Reduction Framework, designed to improve resilience across a range of critical sectors. COAG endorsed the Framework in March 2020 and agreed to take immediate action on several streams of work, one of them being telecommunications resilience.

On 12 May 2020, the federal government announced $37.1 million in funding as part of its bushfire recovery efforts. The funding will be used to harden the mobile phone network through, for instance, better backup power. It will also provide for the purchase of cells on wheels, mobile exchanges on wheels, satellite communications trucks and the deployment of around 2000 NBN satellite services.

As is the case in many other countries, Australia’s public safety communications system has developed into an interlocking network of various capabilities, including LMR systems, the Triple Zero service, public safety agency communications centres, a range of communications devices and interfaces to tie them all together. The proposed PSMB system will need to knit itself into the present Ecosystem.

The overall system is heavily dependent upon access to spectrum, adherence to standards and maintenance of a highly trained workforce.

Technological change is driving innovation within the field and — as everyone in the sector knows — digital transformation, IP-based systems and the demand for video and data are changing the communications landscape and augmenting traditional voice-only services. Public safety and first responder organisations will need to be able to handle Next-Generation Triple Zero (where, for example, someone can send a text message to 000 instead of calling), social media inputs, video streams and so on.

The development of PSMB in Australia is a slow-moving thing, and it’s fair to say there is a measure of frustration within parts of the communications sector regarding how long it is taking… especially when we see systems such as FirstNet flourishing in the US. That nation’s ‘PSMB moment’ came on 11 September 2001, when first responders in New York were unable to communicate effectively with each other as they tried to rescue people in the Twin Towers. Australia’s PSMB moment may very well have been last summer’s bushfires, when limited narrowband voice networks became overloaded under the immense strain of the response effort.

PSMB will need spectrum, a seemingly ever-shrinking resource. In 2012 the ACMA announced that it had reserved 10 MHz (5+5) spectrum in the 800 MHz band for public safety communications. More recently, in common with other countries it set aside a frequency block in the 4.9 GHz band for public protection and disaster relief requirements.

Interestingly, on 11 May 2020 the federal government released a set of policy objectives for the allocation of the 850 MHz and 900 MHz bands, which, it said, would “support the deployment of 4G and 5G technologies, promote competitive market outcomes for the long-term benefit of consumers, encourage investment in telecommunications infrastructure and support a national Public Safety Mobile Broadband (PSMB) capability”.

This has been a brief overview of the very comprehensive 40-page joint submission document. It encompasses many other topics not covered in this summary, and you are encouraged to read it in full — it can be found at https://arcia.org.au/submission-to-bushfire-royal-commission/.

The CDMPS, ARCIA, ACCF, INCOSE and ACRNA are to be commended for producing such a comprehensive submission, which will no doubt be of great value in enlightening the Royal Commission as to the complexities of the nation’s mission-critical communications needs.

The Royal Commission will begin two weeks of public hearings on Monday, 25 May, focusing on the 2019–20 bushfire season and Commonwealth responsibilities as they relate to natural disasters. The hearings will be live streamed, given the current COVID-19 restrictions on face-to-face meetings. You can follow its progress at https://naturaldisaster.royalcommission.gov.au/.

US mobile networks at severe risk from fires

About one in four people in the US live in areas served by cellular phone towers at risk of an...

The NSW SES is taking advantage of a huge boost in in-vehicle radio coverage from Byron Bay to...

Victoria to invest over $275m on digital transformation

Is remote working in government here to stay?