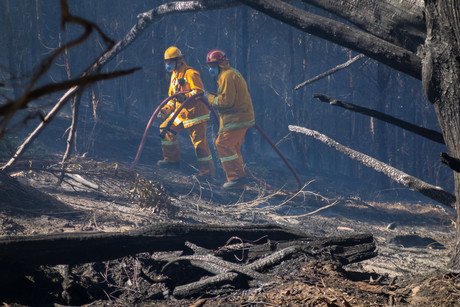 Is the government leaving first responders out of the equation when it comes to the fundamental communications platforms of the future?

The Minister for Communications, Arts and Cyber Security recently announced that an enquiry will be held into giving permission for mobile phone carriers to put temporary transmission facilities in place during emergency situations (Consultation on proposed temporary facilities and other amendments).

What we should be asking is whether this is being done with the needs of our emergency services in mind. After all, like everything else in the modern world, our first responders are relying more and more on data to enhance their capabilities in the preservation of life and property.

For the past seven years our public safety agencies (PSAs) have been discussing and planning for the introduction of a public safety mobile broadband (PSMB) capability to improve the efficiency and effectiveness of their operations. Back in 2014 the Productivity Commission recommended that a system be established as a common network between all of the various states and agencies. This would facilitate interoperability between those agencies as well as offering the substantial benefits that would accrue from having data access in the field, in addition to the traditional voice communications.

Various jurisdictions have been working away at the necessary planning for such a system and have made a lot of progress. However, there is still more to be done.

Given the Productivity Commission’s recommendation that PSMB would most likely be best suited for operation over public carrier networks, then publicly funded improvements to those carrier networks should surely include plans to maximise the benefits for the public through the availability of the PSMB service.

This should encompass not only suggestions for temporary facilities in areas affected by emergencies, but also for facilities being provided as part of the Commonwealth-funded ‘Black Spot’ programs.

Although it would seem at first that any increase in the service facility of the public carriers would benefit the PSMB network, there are some special considerations required.

As the public carriers have progressively rolled out their network coverage, they have had to consider the commercial sensitivities of their shareholders. So there is always a balance between investment in equipment costs and the return on investment of the funds generated by that equipment — a sound business practice.

From a public safety perspective, emergency situations are not always in the areas with the highest population density. So given that the public carriers design their coverage to suit populations, they each will often have different transmission locations to suit user profiles. This is the primary cause of the Black Spot issues — population density, even on a migratory basis, is not sufficient to justify the investment in equipment.

Given that emergency situations, especially bushfires, floods and cyclones, tend to happen in all types of locations, there is a need for our PSAs to have communications availability in most areas, not just those with a degree of population density. At present there may be coverage in many areas, but often the carriers’ network designs mean that in some places the best coverage might come from one carrier, yet a short distance away it might be from another.

Of course this can be solved by giving our PSAs the ability to ‘roam’ between the carrier networks. Yet for commercial reasons (not technical limitations) the carriers do not offer this facility.

With the proposal for public carriers to be able to locate temporary facilities in areas affected by emergencies, surely the federal government (being the spectrum owner) should be making it a condition for approval of such services that ‘network roaming’ be made available for first responders.

This would mean that it wouldn’t matter which carrier has the best-located equipment; the PSAs would have access to the best possible signal levels. Naturally, the underlying requirement for first responders to have priority access and network pre-emption should also be in place.

Along similar lines, any funds provided by the Commonwealth to enhance the network coverage of a public carrier through the Black Spot program should also stipulate network roaming and priority features enabled for PSMB as a condition of that funding.

Most people would expect that these kinds of capabilities would automatically be provided for our PSAs, yet consideration of their needs still tends to be an afterthought. Too much communications planning in Australia has been done within historical ‘silos’ of information. In a modern and connected world there must be a broader approach to communications planning — the federal government’s focus on maximising revenue from spectrum has meant that public carriers have had too much input and influence in the outcomes.

Part of the problem is that our policymakers rely heavily on those devising and developing the plans for our future, yet in many/most instances the planning groups are working within the confines of specific industry sectors.

As our future depends very heavily on the use of spectrum to increase the efficiency of our food supply chain, perhaps the recent announcement of the combining of Commonwealth Government departments into more consolidated groupings might open up some options. The inclusion of the Communications portfolio into the broad grouping of Infrastructure, Transport, Cities and Regional Development might mean that facilities funded by the Commonwealth under the Black Spot program could open up the planning options a little more. But to be fully effective that planning should also include agriculture and water agencies.

In the context of providing data accessibility for our first responders, we must remain cognisant of the fact that, outside of our major metropolitan areas, much of the first responder support comes from local volunteers — the same people who will gain economic benefit from having broadband data available in their daily lives.

It is time that our first responders’ need to have communications at least as good as, if not better than, the general public, is no longer a negotiable item. If we expect the young people of today to still aspire to be police, fire and paramedic heroes, then we owe it to them to give them the very best communications tools to do the job… and not ask them to rely on levels of technology two steps backward from their own personal devices.

It is time to think outside traditional planning silos and apply the best communications solutions for our public safety agencies and the community in general, particularly when we as taxpayers are funding significant portions of the infrastructure.

Ian Miller is Executive Officer of the Australian Radio Communications Industry Association and a communications professional with decades of experience and perspective under his belt.