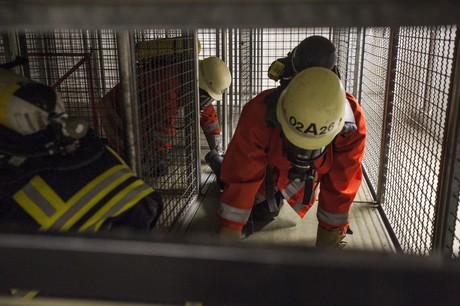 Scientists have developed technology to locate personnel inside buildings without having to rely upon continuous GPS signals.

Rescue forces are often called to free people trapped in buildings following fires, earthquakes or other emergency situations. These missions are very risky: dangers are difficult to assess in advance and the rescuers themselves may suddenly need help.

One of the biggest problems faced during indoor rescues is keeping track of the location of personnel. To help solve this problem, researchers at the Karlsruhe Institute of Technology (KIT) have developed a system to locate injured or buried rescue forces within buildings without the need for GPS signals.

“In crisis situations, a WLAN signal for radio positioning may be lacking and construction plans of buildings are not always available,” said Nikolai Kronenwett of KIT’s Institute for Control Systems.

Together with Gert Trommer, a retired KIT professor, Kronenwett has developed an autonomous system for locating rescue forces in buildings without any radio connection to the outside.

The system works by implanting small sensors into the shoes or boots worn by the rescue crews. From accelerations and rotation rates thus measured, the direction and speed of movement of a person can be determined — a technology that is also used in smart watches.

“The unique selling point of the measuring system is smart stance phase classification. A person’s gait is analysed and four different phases are distinguished: the stance and roll-off phases, the swing phase and loading response,” said Kronenwett.

These phases correspond with a normal step forward. The sensors also detect when movement stops — these zero-speed measurements help estimate and compensate for sensor errors and considerably improve positioning accuracy.

Before entering a building, the system determines the current position by GPS after which no further GPS signals are needed. A person’s position is determined with the help of an algorithm that calculates its current position from the movement information supplied by the foot sensors.

Via an external, independent radio connection, current positions of all the rescue forces are transmitted to the commander’s computer. In case of an emergency, the exact locations of the all the crew members are known and the commander can react quickly.

In addition to the measurement system fixed to the foot, Kronenwett is also working on a system worn on the wrist.

“The foot system precisely determines the position of the user, but does not transmit any information about the surroundings and the structure of the building,” he said.

“The hand-carried system contains a camera that scans the surroundings with infrared radiation and generates a 3D model of the rooms through which the person moves.”

In this way, the commander is given a better idea of the situation inside the building.

The measurement system could be used not only for the determining the position of rescue forces in distress, but also to locate police forces and security staff at airports, shopping centres and train or underground stations; to find miners in underground caves or tunnels; or as an orientation aid for the blind.

Finland strides ahead with its Virve 2.0 devices RFI

Erillisverkot has issued an RFI for end-user devices that could be used by Finland's...

The former CEO of Air New Zealand, Rob Fyfe, has been appointed chair of the Next Generation...

The NSW Bushfire Inquiry has made a range of recommendations for strengthening the state's...

Manufacturing in the new normal