Best of 2020: Keeping the Met connected with TETRA 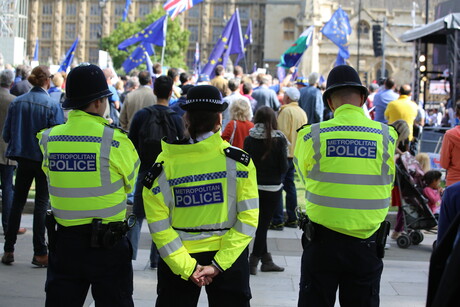 With the ESN delayed, the London Metropolitan Police is refreshing its TETRA network to maintain services and add innovative capabilities.

The London Metropolitan Police (the ‘Met’) is in the middle of a major project to refresh its fleet of TETRA radios, replacing 2004-era units with new Sepura SC20 and SC21 handsets. The refresh was prompted by delays in the introduction of the Emergency Services Network (ESN), a mobile broadband system that was supposed to have been operational by now but which has been delayed until 2022. The refreshed TETRA handsets — which have some innovative capabilities — will keep the Met’s personnel connected until then.

The Met is responsible for policing the greater London region, an area of about 1500 square kilometres. To accomplish this task it has 31,000 officers. To put those numbers into perspective, the state of Victoria is more than 150 times the size of London, yet London has 22 police officers per square kilometre against Victoria’s 0.7.

London is, of course, in many ways quite an extraordinary place. It has a resident population of more than 9 million, plus there are 65 million visits to the city per annum from elsewhere in the UK and from abroad. Heathrow Airport is Europe’s busiest, and the city is home to 164 diplomatic missions and numerous historic places and important buildings. The Met alone has around 200 police buildings.

In addition to the Met, there are two other police forces — the City of London Police (responsible for the central financial district) and the British Transport Police (BTP). All up, between the three forces there are around 35,000 officers engaged in keeping the city safe and secure, almost all of whom need radio contact. That number might seem staggering to Australasian readers, but it is dwarfed in scale by the London Underground, which has its own TETRA network with 95,000 handsets.

The Met began using vehicle radios in the 1930s, and in the 1960s began issuing personal 4-channel VHF sets to officers. That’s the way it stayed until the 1990s, when digitally trunked handsets were introduced. In 2003 the national Airwave TETRA network was established, and the Met’s system grew to have 45,000 handsets and 4000 vehicle sets.

While the US had its 9/11 moment for critical communications, it could be argued that London’s equivalent moment occurred in 1988, when there was a horrible underground railway station fire at Kings Cross. “We had no method of communication underground, neither did the ambulance service nor the fire brigade — no-one knew what was going on downstairs,” said Inspector Chris Fleckney, who is responsible for the Met’s TETRA radio network.

“The suggestion from the Fennell Report into the disaster was, you need to have a better way of communicating underground. I think in those days it probably wasn’t technically possible with our VHF network,” he said. “Although the BTP gained capability, the Met didn’t then actually get an operationally working radio system down into the tunnels until 2008.”

Like most large cities, London hosts many regular and occasional major events, one of which is the annual Notting Hill Carnival, which attracts one million people into a very small neighbourhood with narrow roads that were laid down 150 years ago. In such a locality, interoperability with other emergency services organisations is critical.

“For something like that we will have London Fire Brigade and London Ambulance Service representatives sitting in our control room, each with direct links to their own control rooms,” Fleckney said. “They will bring their own IT… [and plug it] in to our systems so that they’ve got connectivity.

“Interoperability is pretty good, [and] certainly better than when I joined 27 years ago,” he added.

At a local level there is a body called the LESLP, the London Emergency Services Liaison Panel, which produces a guide on how London’s emergency responders will work together; and nationally there is the JESIP, the Joint Emergency Services Interoperability Programme, which provides very clear guidance on how agencies should work together and what everyone’s responsibilities are.

“JESIP came about as a result of a number of incidents where I suspect liaison left a little to be desired,” Fleckney said. “But now everyone, from the rank of sergeant and up, has to do JESIP training. And that has to be repeated every three years.” 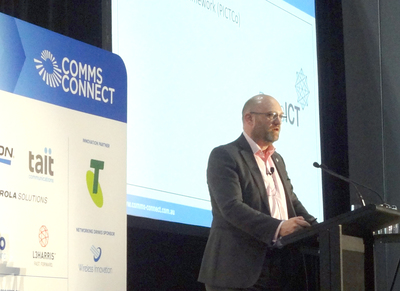 “By far and away the most important work I’ve been involved in since I took up my current post was the operational evaluation and replacement of TETRA handsets for the entire Met Police, which resulted in us purchasing 32,000 Sepura SC20 and SC21 hand-portable radios,” Fleckney said.

The UK policing community, through the Police ICT Company, negotiated a framework to leverage the buying power of the whole of the UK policing market. “And that did two things for us,” he said. “The most obvious thing is [that] it got our suppliers to offer their best and final costs to us. It also meant that the majority of procurement rules — which in the UK can be quite restrictive — were completed as part of the establishment of the framework, not repeated each time a force wanted to purchase, leaving us to concentrate on the decisions as to what handsets were best for us, and it severely reduced the time it would take to review and purchase new handsets.”

The delays with ESN and the age of the existing fleet led the Met to review what should be done. The advantages of the framework (reduced time and cost) made the answer clear — replace the entire fleet of TETRA radios.

“There were a number of handsets available to us from two separate manufacturers, and three key reviews were carried out,” Fleckney said. “Firstly, a commercial review — total cost of ownership over a varied period of time. [Then] a technical review, which was broadly a paper-based exercise comparing and contrasting the specifications of each handset.

“And most importantly, from my perspective anyway, was the operational review,” he said.

“What we clearly needed to do, we needed to offer both manufacturers the opportunity to optimise their handsets for our use,” Fleckney said. “Both companies worked well with us to produce an optimised version of their handset and both performed significantly better the second time around.

“We carried out focus groups where officers from around the Met with different specialisms looked at individual parts of the radio, right down to the PTT button, to understand which handset they preferred and why,” he added. “Obviously there were differing opinions, but by the end of it the answer was clear — there was a strong preference for the Sepura models.”

Perhaps critically, a number of features offered by Sepura’s handsets took their capabilities beyond those of a standard TETRA unit and helped close the gap between expectation and reality.

“We worked very hard with Sepura to personalise their products to suit our needs. We were really, really pleased with the way Sepura reacted to that,” Fleckney said.

“There’s one particular part of that which is called ‘subscriber class by talk group,’ which is not a well-used piece of TETRA functionality. There’s only one other manufacturer that offers it as far as I’m aware. And I’m not aware of anyone else in the world that uses that functionality.

“We use it to basically give a cell site a subscriber class, and then only people on certain talk groups will affiliate to that cell site, which helps us smooth out the load. And we considered that to be quite a difficult thing to achieve,” Fleckney added.

“We asked Sepura — we were really open with them — and said if you can’t do this, there is no point in you wasting your marketing budget trying to sell us these terminals. And they went away and came back and said ‘we can do it’. We were a little sceptical at first, but they achieved it and it works.”

Fleckney said his users like the software, and the improved power (1.8 watts) and sensitivity, as well as the large (for TETRA) colour screen. “Bearing in mind our desire for a rapid rollout, Sepura designed, built and tested, in a very short space of time, a number of software changes to their firmware which minimised our business change and training implementations,” he said. “In particular, they developed functionality which enables us to dynamically spread load across our network during times of high demand, which is absolutely critical in London.

“At an operational support level, the option to have two different models which used common accessory connectors and common batteries was a really significant positive,” he added. 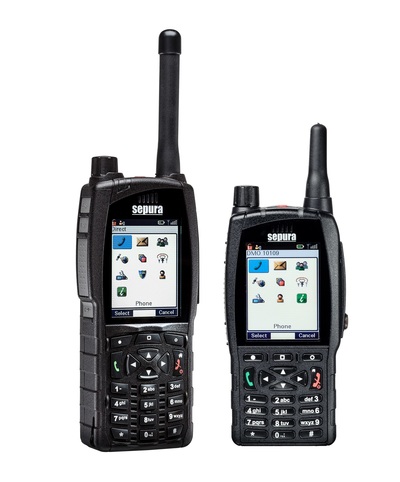 Another welcome change is the ability to reprogram the handsets over Wi-Fi. “Having a handset that, when it’s turned on, checks via corporate Wi-Fi to see if it’s running the latest code plug and, if not, downloads it and installs the latest version, we hope will be an incredible time- and cost-saver for us, and ensures that updates can be made as soon as required,” he said.

Another innovation is the AppSPACE applications environment. The Airwave TETRA system is subject to significant regulatory control and approval, not just by Airwave, but also by the UK’s National Cyber Security Centre, and any changes to device firmware need to go through a number of checks and tests. This can be expensive and quite lengthy.

AppSPACE is innovative in that it partitions the TETRA engine from a second area which is capable of running applications. Although it’s connected to the TETRA engine, it’s separate from it. “Working with Sepura, we’ve been able to create apps that meet our business need but without going through that additional layer of regulatory framework, which saves time and costs for both parties,” Fleckney said.

Working with the ESN

The ESN will be a 4G LTE network using a commercial bearer with emergency services traffic having priority and pre-emption. All UK emergency services personnel will use it, which means they will need around 330,000 handheld and vehicle devices nationally.

“Along with FirstNet in the US, there is no doubt we are breaking new ground in the provision of critical communications to first responders and promising a high-speed data capability that will revolutionise our approach in many areas,” Fleckney said. “However, it’s not without its challenges, and what should have been delivered in 2019 is currently expected in 2022.”

Even when the ESN is delivered, one of its drawbacks will be the lack of off-network device-to-device communications. There is a solution in that the SC20 and SC21 handsets can be repurposed. An app sits on the ESN device and connects using either Bluetooth or wired technology to the TETRA handset. The ESN device is held in a pocket inside the body armour etc, and the Sepura handset acts as a relay and officers can switch between the ESN equivalent of trunked mode and direct mode using TETRA.

The efforts being undertaken to ensure that all modes of voice communication are preserved and enhanced for the Met’s communications, whether that’s with TETRA, the ESN or both together, demonstrates yet again what every emergency services organisation around the world maintains — that voice comms are vital and are not going to go away.

“Maybe in some future that I can’t quite foresee, voice will no longer be the most important thing,” Fleckney said. “But I can’t see that yet. Voice is, and will be for the whole of the foreseeable future, king.”

This article was first published on 1 March 2020