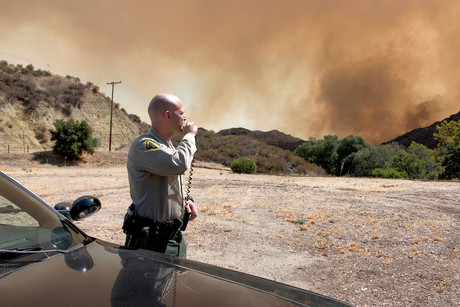 LA-RICS is connecting emergency services agencies across an area of almost 13,000 square kilometres, home to more than 10 million residents.

The LMR network is a digital trunked voice radio subsystem with an analog conventional voice radio system overlay. Although much of data demand will ride on the NPSBN, LA-RICS is also implementing a narrowband mobile data network to ensure connectivity where LTE is not available. This will provide day-to-day radiocommunications for individual public safety agencies, enable interoperability among member agencies and mutual aid providers, and support communication with regional, state and federal agencies in the event of a disaster.

The initial LA-RICS build is in the process of being absorbed into the NPSBN by AT&T, the government-selected vendor for the FirstNet deployment. Additionally, LA-RICS is implementing an additional 26 sites in order to augment coverage where the region’s public safety personnel need it. Our efforts are primarily focused on the Los Angeles/Long Beach Port Complex and in the Angeles National Forest. LA-RICS is also implementing sites in local independent cities that are seeking to move to FirstNet but want to ensure coverage is acceptable prior to moving to FirstNet.

A clear and present need

The 9/11 terrorist attacks fully revealed the lack of interoperable communications among first responders. Police, fire and emergency medical personnel were unable to readily communicate with each other, resorting to the exchange of handheld radios to relay information. The 9/11 Commission Report, released in 2007 following an exhaustive review, noted the critical need for interoperable communications between first responders. While efforts in Los Angeles County were already underway, the 9/11 Commission Report provided further urgency.

Los Angeles County presents many obstacles to such a system, most notably its geographic diversity and its jurisdictional complexity. But those obstacles are the fundamental reason for the demand for interoperability. L.A. County encompasses an area of almost 13,000 square kilometres with more than 10 million residents, making it the most populous county in the United States.

Within those confines are 3000-metre-high mountains, forests, valleys, lakes, rivers, desert and islands situated off the 100 kilometres of Pacific Ocean coastline, all of which present geographical challenges to reliable communications.

In addition, L.A. County consists of 88 incorporated cities and 76 distinct unincorporated areas served by more than 80 separate public safety agencies using a patchwork of 40 ageing radio networks and independent commercial data networks. This historical disparity results in the inability to seamlessly communicate with each other during times of emergency or mutual aid.

While there have been efforts to connect, or ‘patch’, some of these disparate systems, those agencies must continue to rely on their own often ageing legacy networks, and are limited to voice-only communication on the T-band, which will be lost for public safety use in a few short years. Data service is limited to commercial carriers with public safety unable to receive commitments for priority service.

With its diverse landscape and jurisdictional complexity, the need to provide modern, reliable interoperable communications capabilities for law enforcement, fire and emergency medical services was readily apparent. So, in 2009 LA-RICS was formed pursuant to a Joint Powers Agreement between multiple government entities, with a board of directors providing oversight, for the purpose of building a state-of-the-art system that would allow seamless communication among all public safety users and first responders.

The road to begin was a rocky one at first. Due to ever-changing requirements, funding availability, and environmental and procurement obstacles in a project of this size and scope, the initial project was delayed. In the meantime, an opportunity arose when Congress created FirstNet to establish a nationwide broadband network dedicated to first responders.

Realising the value of integrated data and voice communication, LA-RICS received a national grant to be an ‘early builder’ of a dedicated public safety broadband data network, which could be integrated into the LA-RICS LMR network, thereby creating a fully integrated voice and data system. This greatly expanded view of interoperability has resulted in new and creative tools for public safety.

Once again there were further delays due to ongoing funding issues, extensive environmental requirements unique to California and political posturing as well. But the recognised value of LA-RICS overcame all those issues and construction began.

The PSBN was first to start construction, followed by the LMR network. All sites are designed with the most stringent requirements possible, such as independent generator back-up power and 8.0 earthquake standards. Requirements far exceed those of commercial carriers in order to ensure uninterrupted service for public safety during any foreseeable event.

In hindsight, the delay in starting the LMR provided the opportunity to acquire and adopt data technology which greatly enhances the functionality of a voice-only network to form a fully integrated voice and data system. The inclusion of data into LA-RICS’ original vision will now enable users to use portable radios, smartphones, tablets and laptops, computers or other devices to convey information in any format.

LA-RICS is P25 compliant, adhering to a national standard for current and emerging digital voice and data communication systems for public safety and first responders.

Currently, LA-RICS is beginning to construct the final 26 sites for inclusion into the NPSBN while continuing to build its LMR network. To date, approximately 60% of the voice sites are currently completed or under construction, with an ultimate total of 58 to be built.

While LA-RICS continues to build and implement LMR, the new NPSBN sites will be part of the national FirstNet system being managed by AT&T. LA-RICS is proud to be an early builder of this national system, enabling us to better integrate this data network into the LA-RICS mission.

With FirstNet integrated into LA-RICS, users will have PTT and data capabilities via computers, commercial handheld cellular devices or almost any device chosen by a particular agency. This will enable the use of a broad range of applications for situational awareness and to provide a common operational picture for all users. Future plans include the acquisition of mobile vehicles which can be quickly deployed onsite to provide temporary additional FirstNet coverage when needed.

A clear example of how LA-RICS benefits public safety through its common operational picture can be seen during the annual Rose Parade in Pasadena. Due to its threat potential, local, state and federal agencies partner to ensure an enjoyable event.

One million visitors gather along an eight-kilometre stretch of the parade route. Fifteen video cameras are installed along the route providing streaming video to the multi-jurisdictional command post. In addition, personnel carry smartphones which also receive the video feed. On those same smartphone devices, personnel can communicate directly with police and fire personnel from the partnering agencies who are using standard handheld radios.

The Los Angeles County region is also highly susceptible to massive fires, which, unfortunately, are frequent throughout California. With LA-RICS, fire personnel can utilise mobile devices to paint a graphic picture of plans, escape routes, trouble spots or evacuation centres. These maps can be immediately viewed by all LA-RICS users on handheld or in-car devices, providing a real-time operational picture of firefighting activities.

While some agencies may continue to utilise their own system, at least in the short term, LA-RICS is committed to ensuring interoperability with ‘outside’ systems. Those outside systems are either restricted to certain geographical areas, restricted to T-band usage which will be lost for public safety use in a few years or rely on legacy systems which are increasingly prone to failure.

LA-RICS has been designated as the ‘hub’ system for any other legacy systems that agencies may wish to maintain, thereby ensuring that those disparate systems will connect to the LA-RICS LMR system. This ‘system of systems’, with LA-RICS as its heart, will ensure that all agencies, no matter what system they utilise, will benefit from full interoperability with the ultimate benefit being provided to the public at large.

With LA-RICS, users are able to communicate in any form using any type of device. Voice, data, video, pictures, mapping and location services are just some of the benefits. For instance, the use of telemetry will allow emergency medical personnel to stream critical information to doctors on their laptops or mobile devices through an encrypted, dedicated, high-speed network.

Whether users have vehicle or handheld radios, handheld smartphones devices, personal computer or tablets, or personal communication devices, LA-RICS operates on a diversity of devices that enhance ‘away-from-vehicle’ mobility and flexibility to access all forms of information.

Despite the diversity of public safety bands and frequencies currently being utilised, LA-RICS will provide a state-of-the-art platform that can also accommodate interoperable communication without regard to the frequencies being utilised by outside agencies that enter into L.A. County. LA-RICS will ensure that no first responder is left being unable to freely communicate.

This article was first published on 3 October, 2019.

Emergency services and other government agencies will benefit from a $217 million boost to the...

Keeping the Met connected with TETRA

With the ESN delayed, the London Metropolitan Police is refreshing its TETRA network to maintain...