Putting emergency comms to the test

Tests in New York City have suggested how to improve emergency radio communications inside large buildings and tunnels.

Radio communications can be unreliable in underground tunnels and other large, complicated structures, posing a safety hazard for emergency responders. New tests of wireless emergency safety equipment by the US National Institute of Standards and Technology (NIST) have defined the challenges more precisely and suggest how emergency communications might be improved.

In a series of experiments conducted in New York City, an epicentre of underground tunnels and high-rise buildings, NIST researchers measured path loss, or reduced signal strength, which can occur when signals must travel through thick walls and dense material. NIST researchers also found that wireless emergency beacons could be unreliable beyond the street-level stairwell entrance to a four-level subway station, and that signal strength depended on the frequency used in the 100-storey Empire State Building. The findings are detailed in a new report. 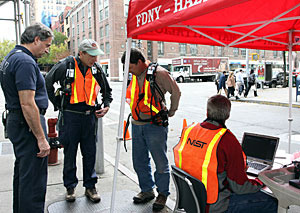 “The systems we tested generally operated successfully as long as path loss did not exceed the threshold specified in standards just adopted in November,” said project leader Kate Remley. “But the path losses we measured throughout these structures were generally much higher than the threshold. This means that repeaters or other technology to rebroadcast signals should be used in these and other similar environments, and standards must be extended to these higher-loss cases.”

The study is part of an ongoing NIST project, launched in 2008, supporting the development of performance metrics and laboratory tests for electronic safety equipment with two-way radio-frequency (RF) transmission capabilities. The New York tests focused on RF-based personal alert safety systems (RF-PASS), used by firefighters as distress beacons, but the test methods and path-loss results are applicable to other wireless devices such as handheld radios.

NIST tested four commercial RF-PASS systems operating in three frequency bands: 450 MHz, 902 to 928 MHz, and 2.4 GHz. Researchers measured whether a firefighter-down signal was received by a base station outside the subway or building, and whether a portable RF-PASS unit inside the structure received an evacuation signal from the base station, within 30 seconds, given a certain amount of path loss.

In the subway, communication was poor beyond the entrance unless a repeater was located underground on the pay-station floor. In that case signals could be sent between the street level and the first passenger platform, but not to or from the second passenger level farther below, suggesting the need for a multihop repeater relay system.

In the Empire State Building, NIST researchers found that path losses increased with RF-PASS operating frequency and that only one of four systems tested communicated successfully without repeaters over most of the building test locations.

The US National Fire Protection Association (NFPA) recently incorporated NIST’s initial RF-PASS test methods into its first standards for RF-based electronic safety equipment. Until now, the NFPA could not certify RF-based PASS devices, which represent a significant advance in safety because of the addition of the RF transceiver. The NFPA adoption means these NIST methods will be implemented by testing laboratories as part of the NFPA certification process for RF-PASS devices.

The New York City tests support NIST’s next round of test methods, which will include tests for reliable voice radio and emergency beacon operations in higher path-loss environments.