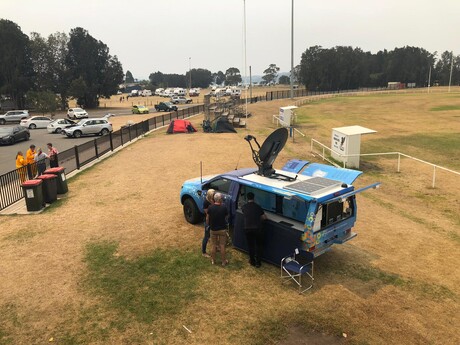 The federal government has awarded $8.3 million in grants to four major telcos for temporary, portable communications facilities that will be rapidly deployed to communities and evacuation centres.

A further $1.7 million has been outlaid for NBN Road Muster trucks and 12 portable satellite kits.

In May 2020, Minister for Communications, Cyber Safety and the Arts Paul Fletcher announced a $37.1 million Strengthening Telecommunications Against Natural Disasters (STAND) package, of which $8.3 million was to be allocated via a competitive grants process to purchase portable communications facilities that can be pre-positioned before the bushfire season.

The successful grants applicants are NBN Co, TPG Telecom, Telstra and Optus, all of which are now in negotiations with the government to fund temporary telecommunications facilities and equipment, such as cells on wheels (COWs) and satellite-powered COWs (SatCOWs or SatCATs).

The telcos will contribute 50% of the capital costs of the facilities, doubling the capital funding.

In addition to these grants, NBN Co has been allocated $1.7 million to purchase five newly designed NBN Road Muster trucks and 12 portable satellite kits, to be delivered before the end of this year.

“These grants will enhance the capability of telcos to maintain mobile and broadband coverage in areas impacted during natural disasters, allowing Australians to contact family and essential services and making sure food, water and fuel purchases can occur,” Minister Fletcher said.