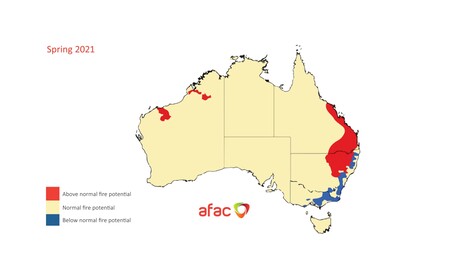 The Australian national council for fire and emergency services, AFAC, has released its bushfire seasonal outlook for the upcoming spring of 2021, with varied fire potential for locations across Australia.

The outlook through until the end of spring suggests above average rainfall is likely over much of the country except western parts of Western Australia. The negative Indian Ocean Dipole driving the wetter outlooks is likely to end in November or early December, as is typical of its seasonal cycle.

While most of Australia shows normal bushfire potential during the spring outlook period, destructive and deadly fires can still occur during normal bushfire seasons across Australia. Fire potential can vary greatly, even at the smaller scale, between bordering states and territories. Each state and territory’s assessment considers different land use types and vegetation types. This in turn is influenced by different forecasts for temperature and rainfall over these regions.