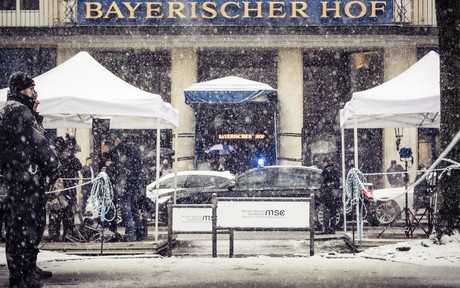 Airbus has supplied TETRA communications technology for the 55th Munich Security Conference (MSC) for the eighth time in a row.

The Airbus technology comprised two base stations (TB3c and TB3hp) at the Bayerischer Hof convention centre in Munich’s city centre and provided best indoor coverage. Moreover, a third base station was placed in the vicinity of Munich’s airport. The latter helped to better conduct the arrival of international delegates. All in all, this professional communication system improved the event’s overall security.

A fourth base station was placed in the plenary hall of the Bavarian Parliament during the John McCain Award ceremony. This unique event in the context of the MSC honours outstanding academic accomplishments in the presence of top international politicians.

Airbus supplied professional devices such as the Tactilon Dabat, which combines a secure Android smartphone with a TETRA radio. Specific applications which were designed for this event facilitated security checks and indoor geolocation.

At the same time, Stadtwerke München provided the Airbus TH1n — said to be the world’s smallest TETRA radio — to the conference staff, including the German Armed Forces (Bundeswehr). It is particularly suitable for covert use and has proven its effectiveness at the MSC for years.

“Since 2012, Airbus has served us with highly reliable mobile communications services. Consequently, we have decided to extend the contract with Airbus until the year 2021 to support our yearly conference in Munich,” said Benedikt Franke, Chief Operating Officer of the MSC.

Initially launched in 1963, the MSC has become one of the most important conferences in the fields of foreign and security policy. Each year, it gathers high-ranking policymakers from across the world with a forum for constructive discussions of current and future security challenges. Like every year, numerous guests from Germany and abroad are expected to attend the conference.