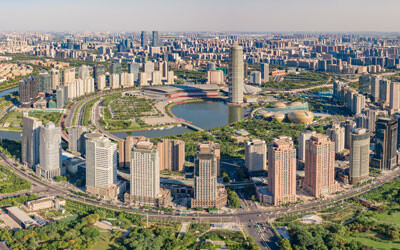 The South China Morning Post has reported the first disaster relief deployment for China's Wing Loong 2H emergency relief unmanned aerial vehicle (UAV), was deployed during recent floods in regional areas. The drone had been tested in an exercise last October for tasks such as restoring communications and sending real-time images in areas without base station coverage.

The UAV was twice flown from Guizhou province in the south to the central Henan province. Following a four-hour flight, the drone reached the flood-ravaged city of Gongyi, west of Henan’s capital Zhengzhou. Among the worst-hit areas, Gongyi was hit by power outages and loss of communications because of the heavy rain.

The drone hovered for five hours during heavy rainfall, serving as an airborne base station that provided communication services for people in the area. A text was sent to every mobile phone user in the area, informing them of the link being temporarily restored, stating: “Please connect with your relatives soon and report your situation.” About 3600 mobile phone users connected, according to China Mobile.

The drone then flew around conducting damage assessment for a further three hours, before returning to its base in Guizhou.

The second deployment came on Thursday, to help restore communication for a hospital in Zhengzhou. More than 1000 patients and visitors, as well as 800 medical workers, were trapped at the site, which was submerged in up to two metres of water.

Robin Rao, a communications engineer for a world-leading drone developer and manufacturer, said the relief drone could connect to satellites whose communication capabilities would not be affected by weather on Earth. According to Wing Loong’s developer, the Aviation Industry Corporation of China’s Chengdu subsidiary, each drone can provide space-air-ground communications for up to 35 working hours, such as in emergencies when ground-based facilities are destroyed by fires, earthquakes and floods.

$6 million of infrastructure assets to be distributed country-wide in readiness for summer.

Almost 89% of Australians have some kind of IoT device in their households: most are unprotected.