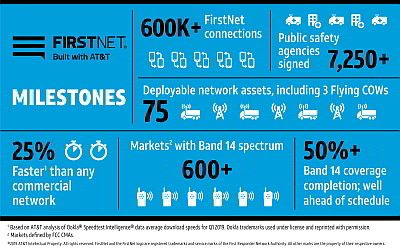 AT&T has announced that the FirstNet communications platform has surpassed the half-a-million mark, with 600,000-plus device connections now being used by more than 7250 public safety agencies.

The network consistently performs more than 25% faster than any commercial network, according to an AT&T analysis of Ookla Speedtest Intelligence data average download speeds for Q1 2019.

The company added that Band 14 spectrum has now been deployed in more than 600 markets across the US.

“Our team remains focused on delivering the modern capabilities, coverage and capacity needed to strengthen first responders’ communications nationwide. These results serve as another proof point to show the work is paying off for public safety,” said Chris Sambar, Senior Vice President of FirstNet, AT&T.

“We’ve entered the second year of our FirstNet Band 14 rollout with incredible momentum, already tracking well ahead of schedule, covering more than 50% of our total nationwide coverage targets. And we don’t intend to slow down as we keep delivering for those we rely on most.”

AI to help workers return to the office

COVID-19 cloud solutions that build for the future