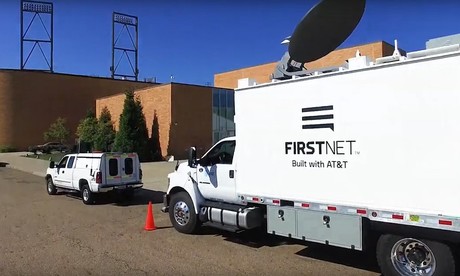 Canton, Ohio, is home to the Pro Football Hall of Fame. Each year it attracts many thousands of visitors from around the US as it plays host to the Enshrinement Festival.

Having had a positive experience using FirstNet for daily operations, the City of Canton Police Department arranged a collaboration with first responders from the Canton Fire Department and the Stark Country Sheriff’s Office to re-enlist the network for the 2019 Enshrinement Festival events.

The system was put to the test straight away, when a severe thunderstorm with threatening lightening delayed the festival’s Concert for Legends and first responders had to evacuate more than 30,000 concert-goers from the Tom Benson Hall of Fame Stadium to a safe location.

Despite the surge in members of the public using their mobile phones and connecting to the commercial networks, the first responders from the three agencies were able to stay connected via FirstNet and communicate with each other inside and outside the stadium.

“Everybody was on their phones for a period of time before the concert started. There was no way we could get on the public sector broadband to communicate, and we were able to seamlessly communicate with each other with our FirstNet Band 14 communication,” said Sheriff George Maier, Stark County Sheriff’s Office.

“It made it a lot easier when we trying to coordinate moving 30,000 people around in the stadium. It was certainly an advantage.”

Alaska's Department of Public Safety has given carriers a one-year courtesy notice that a...