For Iowa County, one of 99 counties in the largely rural US state of Iowa, a recent upgrade to digital radio has delivered a spectacular boost in communications performance. Where previously it took many minutes to contact all the emergency forces needed to cover an incident, today the whole alerting process can be completed in seconds.

In preparing for its digital rollout, which went live in August 2018, the county chose a hybrid system which combines Project 25 radio for voice communications with a POCSAG paging system from Swissphone for alerting crews. Alongside the improvement in speed, the combination delivers reliable coverage of this largely rural area at far lower cost than an all-P25 system.

The Swissphone network replaces an old tone-voice paging system which could be tricky for the dispatchers to handle. “Previously our infrastructure consisted of two tower sites for paging and the radio,” explains Josh Humphrey, Emergency Management Director for Iowa County. “They had to guess: ‘Do I page off the south tower or off the north one, for whichever agency is related to the event?’”

The tone-voice paging system allowed only one agency to be paged at a time. “We had a policy setting for which agency had priority over others,” he adds. “So if we wanted to page the whole county, it might take us 20–25 minutes to page everyone — whereas now it takes only seconds to page everyone. So, alerting-wise, it’s a huge, huge time-saver.”

Better and cheaper than P-25 Paging

“We have eight paging sites now,” Humphrey continues. “And the infrastructure is a lot beefier: reliability and coverage are exponentially better. We were having a lot of issues with tone-voice paging where we would get phantom pages at 3 a.m. We don’t get any of that any more!”

The new system is the outcome of three years’ work by a five-member radio committee, now the county’s radio governance board. The supplier chosen to provide the paging network was Iowa-based RACOM Corporation, which has provided a similar Swissphone alerting system to nearby Blackhawk County.

Among the alternatives evaluated by the committee was to use the Project 25 800MHz network for paging as well as voice. This looked promising — but only one company was offering pagers at that time, and they were expensive. “Most of our agencies here are volunteer fire, volunteer EMS people,” comments Josh Humphrey. “They are reliant on fund-raisers like pancakes breakfasts. So the communications committee basically said there’s no way that we can go to these fire departments and say one pager is going to cost you $1000. How many pancake breakfasts does it take to buy one fireman his equipment?”

A further drawback of the P25 paging option was that extra radio sites would have been needed to achieve adequate radio coverage across the county. While a DiCal site costs less than USD 20,000, a new P25 site can cost half a million dollars, and three of the towers which today carry DiCal paging transmitters would not have been suitable for P25. “Those towers wouldn’t be able to support the microwave backhaul,” explains Steve Holmes, Senior Project Manager at RACOM. “So that would have been an additional big expense, to install a bigger tower that would support the backhaul. That in itself is a huge saving.”

Yet another possibility was to convert the existing network to simulcast paging, retaining its tone-voice pagers. However, simply to add the simulcast controller could have cost as much as $1 million.

Swissphone’s network plus more than 300 brandnew digital s.QUAD pagers for the county’s volunteers worked out USD500,000 (AUD 700,000) cheaper than just upgrading the old analog network and keeping the old analog pagers. “It was pretty much no question that this was the best solution,” Humphrey declares. “As a steward of taxpayer money, how would you justify not [choosing the new system], knowing that with simulcast tone-voice paging we were still going to get those phantom pages in the middle of the night, we’d still have reliability issues with the pagers such as battery issues.

“Now we are seeing anywhere from six to eight weeks on a battery without charging it, and I’m getting every page on my pager.” 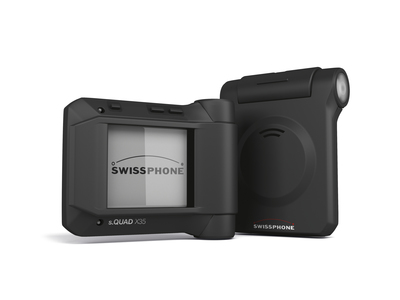 Swissphone offers several two-way capable pagers, such as the s.QUAD terminal which connects to the smartphone via BLE interface. It is IP67 rated, very rugged and extremely sensitive for maximum coverage. By using the cellular connectivity and GPS of the smartphone, it remains independent of cellular technology cycles and maximises battery life. In addition, there are terminals with integrated LTE Cat NB1/LTE Cat M1/2G module based on LTE networks for IoT applications. LTE Cat NB1 and LTE Cat M1 consume significantly less energy than 3G/2G, and battery life is correspondingly longer. Swissphone is working on implementing the Australian bands.

A key feature of the Swissphone technology is that its sites do not all require a direct IP connection, either microwave or wired. Instead they can link one to another over the air, via the paging frequency. “So we have three sites now that aren’t on microwave — they are a secondary ring,” says Josh Humphrey. And he reflects: “The cost which it was going to take to add new towers and expensive P25 sites, and then to buy all those pagers — a $200 pager versus a $950 pager. Which one would you want to buy?”

The ability of Swissphone’s system to communicate over the air-interface also means that all DiCal base stations can still be reached even if one or several IP connections should fail in a blackout. In that case, the network automatically detects the connection failure and sets off all base stations over the air-interface. This is one of the fallback levels of Swissphone’s System, which is set up completely redundantly.

As a supplementary alerting system, to back up the paging network, the county has been using a commercial service which communicates with smartphones via a mobile app. But this will be soon replaced by Swissphone’s s.ONE software, an application for alerting, monitoring and resource management, in conjunction with the s.QUAD pagers connected to the smartphones of firefighters. This hybrid option of the s.QUAD allows the firefighter to let the dispatcher know his availability and to acknowledge an alert.

The paging system went live after 30 days of shadow operation, having been integrated smoothly with the county’s existing CAD system. Training was provided for operators and the users, including the county’s many volunteer responders — who now carry Swissphone’s simple-to-use s.QUAD message pagers — to make certain that they were comfortable with the new system.

For the dispatchers, the biggest improvement is in being able to target their messages, Humphrey believes. “They have the ability to select however many agencies are involved in that incident, select them all, give them the same message, send it once, not have to repeat that message multiple times over several minutes.... That speeds up the alerting process, which is the whole point of an alerting system.

“In the end, it works just like it was promised, and it’s reliable and it’s resilient and it cost less than everything else. It is exactly what we asked for, it does what it does and people now can see that there was no smoke and mirrors. That’s exactly what it is.”

The options for Iowa County

DiCal digital paging is the most cost-effective solution for alerting and fully compliant with NFPA 1221.

EKA CyberLock is the solution for securing remote sites such as traffic control boxes or remote...

Today's paging technology offers the coverage and resilience of a large, shared network with...

Until recently, LTE has been used a supplementary mobile broadband technology in the public...

Innovative education ideas to be showcased