A private LTE network for mining

A private LTE network is paying dividends for one of the world’s biggest gold producers.

Gold Fields is a South Africa-based gold mining company with operations in several countries, including four operating mines in Australia. In order to improve its operations, the company recently installed a private LTE network at its Granny Smith site near Laverton in Western Australia. The technology comprises base stations from Nokia, mobile core network and associated voice solutions from Cisco, and handsets and modems from a variety of vendors.

“Anything that can assist with safety and efficiency is of interest to Gold Fields,” said Rodney Nebe, the company’s senior network engineer, responsible for all IT and communications infrastructure across the region (Australia and Asia) and the project leader for the LTE implementation.

The system was designed and installed by Challenge Networks, a well-known Australian system integrator that specialises in building small PSTN, data and mobile networks. Based in Melbourne, it installs networks around the globe, especially in the developing world. In the last few years it has diversified and, based on its previous expertise, has started building private LTE networks for industry both in Australia and internationally.

Gold Fields chose Challenge Networks because “it has proven experience in rolling out LTE solutions, can provide a true end-to-end solution and can work not only in Australia but overseas on other Gold Fields mines,” said Nebe. Having the backing of leading technology vendors Cisco and Nokia was a plus, too.

Gold Fields wanted to discontinue the Granny Smith mine’s Wi-Fi network for production activities and move the functions to LTE. Those functions include control of SCADA devices and internet access for staff around the mine (which spans 20 x 5 km). And of course, the LTE system provides mobile voice communications as an expansion to the legacy DMR and PABX systems. 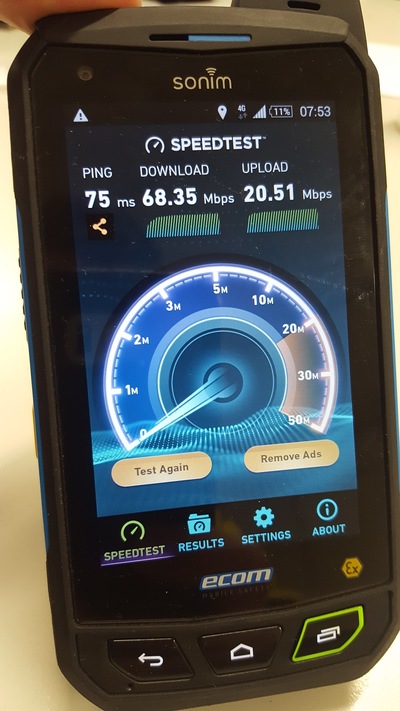 Impressive internet speeds have been achieved across the Granny Smith mine site in remote Western Australia, thanks to its new private LTE network.

“Staff now have better access to information wherever they are in the mine site, and improved communications efficiency — they can contact anyone at any location around the mine,” said Nebe. “Plus, additional coverage and capacity means that devices and systems that were previously unconnectable now are connectable.”

An example of how the LTE network has improved safety and efficiency is the insight the company now has into multiple water bores that are some distance (10 to 30 km) from the main mine centre. Previously, these sites had no communications connectivity — staff had to drive to each of them each day to check their condition, status, fuel supply and so on. Now, each of the bores has LTE modem connectivity and can be monitored remotely.

As well as big savings in efficiency (ie, staff time), this development has also brought safety improvements since staff don’t have to travel as much… and road conditions can vary greatly in the outback depending on the weather.

“As far as we can tell, this is the first private LTE network for the gold mining industry anywhere in the world,” said Simon Lardner, director, Challenge Networks. “The LTE network is fully integrated into the legacy DMR network used in the mine, and the LTE handsets have PTT functionality that integrates with the DMR voice channels. This means that Gold Fields staff can now carry an LTE handset rather than a legacy DMR handset.” 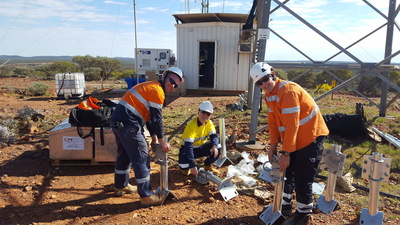 The private LTE network was installed and operational within days.

“Building the LTE network was easy; that is something Challenge Networks could do,” said Lardner, citing bridging the legacy LMR into the Cisco PTT application on the LTE devices and integrating voice with the Cisco Call Manager PABX system as two challenges the company faced.

“The hardest parts are the components that can really only be done internally by a client — change management, and so on,” added Lardner.

According to Nebe, the rollout was “pretty straightforward with no real problems”. The solution was implemented approximately eight weeks after initial purchase order and the project was delivered on time and on budget.

“The initial deployment was seamless, a perfect installation,” said Nebe. “We had comms within two days, and we were doing the drive tests by days 6 and 7, and the coverage is absolutely excellent. In places where we thought we weren’t going to get coverage, well we were quite pleasantly surprised.

“We have a much bigger footprint now.” 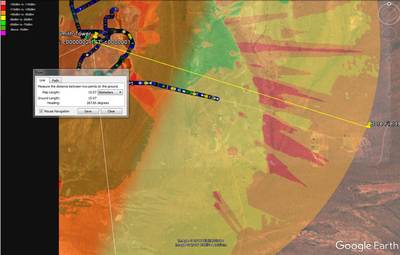 Gold Field's LTE network has given it improved coverage right across the Granny Smith mine site in Western Australia. The circle has a radius of 15 km.

When asked why Gold Fields chose to implement a private network rather than go with one of the major consumer telcos, Nebe said that the consumer network options were actually much more expensive. Also, “They did not have the required reliability and features, nor the required flexibility and control,” he said.

The next step will be expansion of the LTE solution to its other mines within Australia and overseas. The company is also looking at expanding coverage into its below-ground mines, as well as having redundancy of the core network between two mine sites. 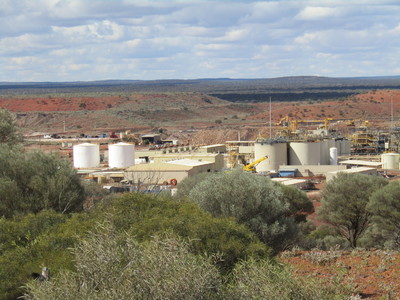 “Granny Smith is predominantly an underground mine. The actual deployment [of this LTE network] was more for the processing plant; so for all the surface communications,” said Nebe. “If we can deploy it underground, that’ll be a huge leap ahead — then we won’t have to have Wi-Fi units on the trucks. You can just have an LTE phone, clip it into your vehicle and you’ll have coverage everywhere you go aboveground and underground.

“It would also be good to have roaming for handset devices on our private network to be able to transparently roam onto the consumer networks,” added Nebe. “Gold Fields is currently working with Challenge Networks to resolve this.

“We also want to use the LTE network as a communications framework to develop new solutions and applications to further improve efficiency and safety,” he said.