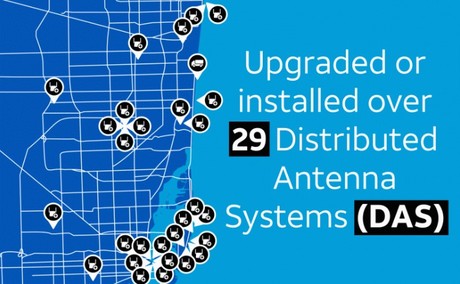 Rival telcos AT&T and Verizon have spent a combined $244 million (US$165 million) on upgraded communications, including 5G, to boost coverage across sections of Miami that will play host to the Super Bowl football event on 2 February (US time).

AT&T has spent US$85 million over the past year, boosting coverage and capacity for both consumers and FirstNet subscribers.

“When fans head to Miami to cheer on their team, we want to keep them connected to share and engage with their favourite experiences,” said Chris Sambar, EVP, Technology Operations. “The investment we’ve made in our network will help them connect faster and easier than before.

“Many of our network enhancements deployed for the Big Game are permanent and will continue to benefit customers and first responders in the city long after the champion is crowned,” Sambar added.

Those enhancements include upgrades to AT&T’s portion of the in-stadium distributed antenna system (DAS), resulting in more than 300% more LTE capacity than was available at the start of the US football season. According to the company, it is “utilising the most LTE capacity currently available on any AT&T DAS in the state of Florida”.

For consumers, the company also:

For FirstNet users, the company has:

For its part, Verizon has invested US$80 million to boost its network for the Super Bowl, including making its 5G Ultra Wideband network accessible around Miami’s airports and in parts of the city’s Downtown district, plus Bayfront Park and Hard Rock Stadium, the site of the Super Bowl.

The company said this will be the “first time customers will be able to access a commercial 5G Ultra Wideband network with a commercially available 5G device inside the stadium during the Super Bowl”.

Not everyone is impressed with the rapid expansion of telecommunications in the area, however.

Miami-Dade Commissioner Eileen Higgins has described the proliferation of small cells on concrete towers across the city as “an absolute mess”.

Commissioner Higgins told a County Commission meeting that “Downtown is the epicentre of a land grab by the telecommunication companies. We have an absolute mess.”

She said rushed, sloppy installation work was creating a hazard for pedestrians, with stray wires, rats' nests of cables, and splice cases lying on the ground or strapped to trees with yellow caution tape.

“The crews tell me it’s not electrified but how are we supposed to know? The boxes aren’t closed or locked, wires are hanging all over the place,” Higgins said. “These torn-up sidewalks are deathtraps; people can trip and fall. You can’t get around the poles in a wheelchair or with a stroller.”

The rollout of 5G means concrete poles that hold the small cells are being installed every 100 metres, sometimes right in the middle of footpaths.

“If this was done in an orderly way, and homeowners and businesses had proper notice, I’d be thrilled to showcase Miami as one of the first cities with 5G,” she said. “But you can’t use the Super Bowl as an excuse to do shoddy work. They are marking their territory and it’s destructive.”

In this extract from his new microwave handbook, Trevor Manning explains some of the intricacies...

Scholarships available to women in ICT