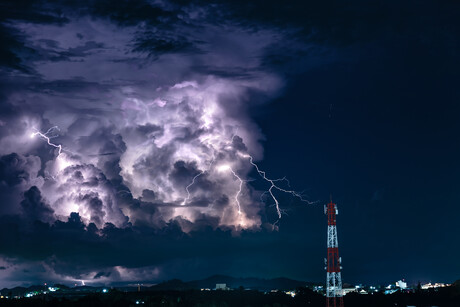 A total system approach can protect radiocommunication sites from even direct lightning strikes to towers, antennas and powerlines.

It is not difficult to understand why radiocommunication stations are so prone to lightning strikes. Sites are generally located on elevated ground and mountain tops and have an antenna tower or mast prominently located to optimise radio coverage for the surrounding areas. The tower and its antennas are therefore highly susceptible to receiving direct lightning strikes.

In addition to direct strikes to transmitting structures, direct and induced lightning strikes to powerlines feeding equipment buildings must also be considered.

There are two common statistics used to measure the incidence of lightning strikes. The first is the term ‘thunderday’. This term is defined as a calendar day during which thunder is heard at a given location. The international definition of lightning activity is given as the number of thunderdays per year. This is also called the ‘isokeraunic level’.

Thunderday maps are published by meteorological organisations worldwide. As may be expected the number of thunderdays is generally greatest in tropical regions around the equator and falls off as one progresses north and south towards the poles.

Another commonly used statistic to record lightning activity is the ‘lightning flash density’. This is defined as the number of lightning flashes to ground occurring on or over unit area in unit time. This is commonly expressed as per square kilometre per year (km-2 year-1).

As may be expected there is a relationship between thunderdays and ground flash density.

To assess the susceptibility of the antenna structure to lightning, the number of likely strikes per annum can be readily calculated. The attractive radius of tall, slender structures typical of antenna towers can be found by use of an equation for Ra:

Ra = the attractive radius for the structure, in metres

I = the prospective lightning stroke current amplitude, in kiloamperes

h = the structure height, in metres

Using the above equation, a structure with a height of 30 m and a prospective lightning stroke current of 130 kA, which accounts for 99% of all lightning strikes has an attractive radius of 309 m.

The collection area is then given by:

Ac = the collection area for the structure, in square kilometres.

Finally, the prospective number of strikes per annum can be calculated from:

P = the prospective number of strikes per annum

In an area with 150 thunderdays, which is typical of Malaysia, the mean ground flash density is 15. So a 30 m-high antenna tower will receive on average 4.5 direct strikes every year.

This is a statistical calculation but provides ample evidence of the need for effective lightning protection at these sites.

The transient discharge of electric current that occurs between a negative charge centre and a positively charged region is a lightning flash. A typical flash is made up of one or more discharge components or pulses, with each pulse consisting of a negative leader stroke and a positive return stroke. 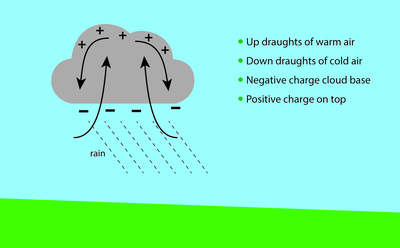 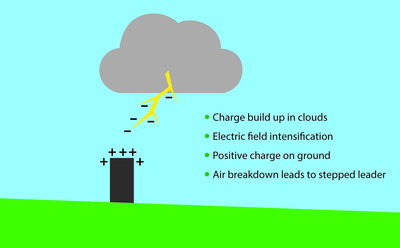 Figure 2. Development of the downward leader.

Charge build-up continues until the electric field is so great that ionisation of the air occurs. As ionisation occurs, the stepped leader extends from the cloud towards ground bringing electric charge with it.

Figure 2 shows a building or other structure. The effect of this structure is to distort the electric field as its top is at earth potential. The field lines now must curl around the building, creating field intensification at the top and corners. 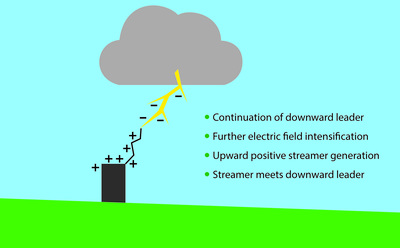 Figure 3. Development of the upward streamer.

At some point the breakdown electric strength of air will be reached and ionisation will occur. This gives rise to an ‘upward streamer’ which heads up to meet the downward leader.

For tall structures streamer creation is most likely around points of high field intensification, ie, at the tops of antenna towers and masts and the corners and other extremities of buildings. 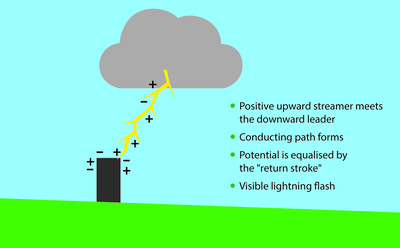 One of the upward streamers will meet the downward leader and complete the ionisation path. The electric charge is then discharged via this path and the so called ‘return stroke’ current flows. The return stroke current flow collapses the electric field and it is this collapse in electric field that is responsible for induced voltages in power conductors and other metallic conductors.

Thus, the structure must be protected against direct strikes plus the indirect effects of a nearby strike creating induction due to the collapsing electric field after the lightning flash.

When lightning strikes a tower that is grounded the current pulse, which typically may have a rise time of 1 microsecond and a decay to half amplitude of 50 microseconds, will flow down the tower to ground.

The potential at the top of the tower may be calculated from the following formula:

dI/dt = Rate of rise of current in amps per microsecond

For a 50 kA current rising in 1 microsecond, the potential at the top of the tower will be approximately 1.25 MV.

It is not possible to reduce this voltage build-up. Any protection system must take this into account.

As the current pulse flows to ground a rise in ground potential will also occur. By ignoring the effects of inductance and considering resistance of the earthing system alone, this earth potential rise can be easily calculated.

For example, a 50 kA impulse flowing to ground with a 10-ohm earth resistance will raise the earth potential by 500 kV.

Since the local ground potential rises, any cables leaving the vicinity of the tower will carry this potential to the transmitter building. Current will flow along coaxial cable sheaths and create a potential between the inner and outer conductors of these cables.

At many stations, the tower can often be located some distance from the equipment building so it cannot even be assumed that both the tower and building earth will rise to the same potential.

A direct strike to an antenna tower is unlikely to damage antennas unless the antenna itself is struck or correct earthing and bonding principles have not been adhered to.

Antennas which form the highest point of the structure and are not at tower potential are particularly vulnerable and it is difficult to protect these effectively. High-gain whip antennas mounted at tower top are typical examples. The best form of protection is to carry some spares.

Where antennas are mounted on the lower faces of the tower, it is usual to erect a vertical spike, or Franklin rod, at the top of the tower to act as the air terminal. To be effective, the top of the rod needs to be at least 3 metres above the highest point of the antenna.

No special precautions with regard to down conductors on all-steel towers are necessary. The four legs of a self-supporting tower provide an excellent path for the lightning impulse current.

Special air terminals and proprietary down conductors consisting of custom-made coaxial cables etc are totally unnecessary. They do nothing to reduce the potential rise at the top of the tower and cannot possibly be insulated to the level required to prevent flashover to the tower itself.

Concrete towers and masts can utilise the concrete reinforcing, ladder and any other steel work for the down conductor path.

Since a direct strike to the tower will raise earth potentials and cause current to flow in feeders and coaxial cable sheaths, it is essential to pay attention to correct earthing and bonding practices. 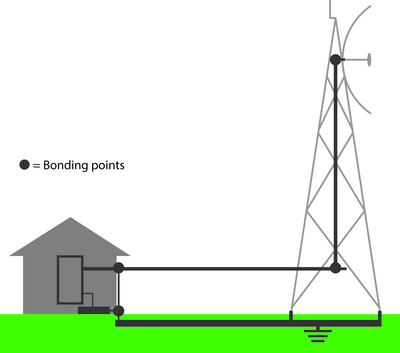 The geometry of the interconnections in and around the building are of vital significance to the effectiveness of the lightning protection system. The objective is to provide a path for the potentially destructive lightning current flowing from the antenna to the AC supply line via a path that does not include the interior of the building.

It is impossible to reduce earth resistance to zero so there will always be earth potential rises developed when lightning strikes. By carrying out the above procedures a single earth will be produced such that an equipotential earth rise will occur and current flow in the building through vital equipment will be eliminated.

The AC supply line to the building usually represents the lowest impedance to remote grounds and will therefore carry much of the lightning current flowing away from the site. The surge protection installed must thus have sufficient capacity to carry these currents.

This situation is altogether different from the case of induced voltages in powerlines, for which many surge protection devices are designed.

Generally, three-phase versions with surge ratings no less than 120 kA would be employed. Current ratings depend on the station requirement. For typical cellular GSM sites this would be in the order of 40-plus amps per phase. These filters are installed at the building point of entry of the AC power supply.

At high frequencies, the components used in power filters are unusable. Metal oxide varistors have a high self-capacitance which shunts RF energy. The only useable device is the gas-filled arrester, which may be connected between the inner and outer sheaths of coaxial cables to clamp differential voltages.

Such devices are readily available for low-power transmitting and receiving equipment up to a few hundred watts.

At the building entry the lightning energy can be diverted to earth by the action of bonding the coaxial feeds to earth. The inner conductor of these cables must also be protected. This is done by coaxial surge protectors which divert energy from the inner conductor to earth. A recommended procedure is to establish a station earth bar, then use bulkhead mount coaxial protectors mounted on this earth bar to provide the termination point for incoming coaxial feeders.

For cellular telephone sites there are two specific cases to be considered.

Phillip R Tompson is Technical Director at Novaris. He is a chartered member of IE(Aust), IEE, and IEEE as well as a member of the Australian Standards Committee on lightning protection.

This article was first published on 27 October 2020