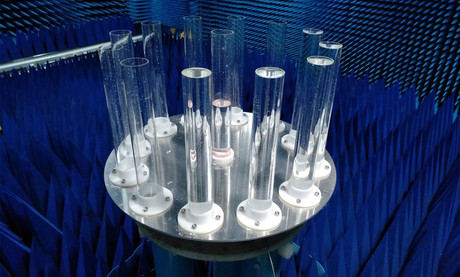 A saltwater antenna capable of steering VHF and UHF signals could help improve maritime, internet of things (IoT) and 5G communications. The antenna, developed by researchers at the Nanjing University of Aeronautics and Astronautics’ College of Electronic and Information Engineering, uses a circular ground plane with 13 transparent, acrylic tubes that can be filled with or emptied of water to achieve 360° beam-steering for signals between 334 and 488 MHz.

The key to its steering ability lies in its configuration, where a central, driven monopole that is fed radio signals via a copper plate is surrounded by 12 ‘parasitic’ monopoles. When only the central pole is excited and contains water, an omnidirectional signal is generated. However, when all the tubes are excited and some of the ‘parasitic’ tubes are filled with water, the water-containing tubes act as reflectors, giving the signal direction.

While this is not the first antenna to harness the liquid, transparent, cheap and readily available nature of salt water, it has improved on previous designs, achieving 13 directional patterns including the omnidirectional state, whereas others have two to four. It also has a higher realised gain and wider fractional bandwidth (4.2–5.8 dB and 37.4%, respectively) than most reconfigurable liquid antennas, the researchers said in a publication in IEEE Antennas and Wireless Propagation Letters.

Better still, it can be completely switched off and drained, rendering it almost undetectable by radar — an effect that is difficult to realise with metal antennas, according to a blog post on IEEE Spectrum.

The researchers also believe their design can be applied to other liquid antennas or antenna arrays.

While there are plenty of advantages to the saltwater antenna, there are drawbacks — namely that salt water’s permittivity is sensitive to temperature variation, an IEEE Spectrum blog post explained.

The project’s lead researcher, Lei Xing, intends to continue exploring liquid antenna designs in the future, according to the IEEE blog post.

Multi-mode comms for roads and tunnels

Students say IT education most relevant for future jobs

Accenture, NASCIO issue report on role of US state CIOs