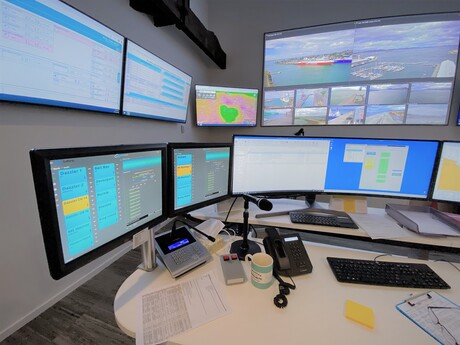 Tasmanian Ports Corporation Pty Ltd (TasPorts) is responsible for 11 Tasmanian sea ports and the Devonport Airport. It has successfully used Omnitronics equipment in its control centres for decades and has been a longstanding user of the DX64 dispatch system. After making the decision to upgrade the DX64, TasPorts chose the latest generation omnicore.

The existing Omnitronics system supported 21 repeaters and seven dispatchers across two locations — the Launceston State Operations Centre and Port of Bell Bay. Eventually there would be a need to cater for 28 channels in total, so the company was looking for a solution that is cost-effective and easy to deploy as well as technologically advanced.

TasPorts uses VHF marine analog radio connected via IP. It wanted an easy-to-manage and easy-to-maintain dispatch management system that would instantly update changes from a central location across all consoles in both of its Vessel Traffic Service (VTS) centres. In addition, the new system needed to be mission-critically reliable, as maritime navigation and distress calls are also managed by the operators. Ideally, TasPorts preferred applications that would run on commercial off-the-shelf (COTS) equipment and operating systems.

TasPorts chose the Omnitronics omnicore Enterprise Dispatch Management System, not only because it meets its needs for current and future functionality, but also because it is based on the proven technology of DX-Altus and RediTALK-Flex radio dispatch. The interface set-up of the previous system was easily replicated and within 20 minutes of omnicore going live, the operator was able to competently interact with a vessel using the new console.

“I played a bit with the test install before Omnitronics came in to install our new system. It was so easy to set up that when they arrived only 45 min later, I had almost finished,” said Ben Stoffelen, IT Network Administrator, Tasmanian Ports.

omnicore dispatch enabled TasPorts to implement its own high-availability solution across two locations and on its own servers as virtual machines (VMs). With two servers, one in the Launceston State Operations Centre and one backup server in Bell Bay, TasPorts is able to communicate to its 15 remote sites scattered across the state from either of their two dispatch locations. Three operator consoles, including one supervisor station, are used at the central Launceston VTS, now upgraded to omnicore. Another omnicore system is fully operational at the Bell Bay centre. In addition to server redundancy, omnicore consoles support high-availability even further, as each console can continue to operate in the unlikely event that both servers are down.

omnicore provides reporting mechanisms and analytics for operational and business needs. For example, where in the past the team had to rely on anecdotal information to know that one geographic region — known for its rough weather — has a higher number of incoming calls than other regions, a supervisor can now quantify these through integrated reporting of relevant metrics… meaning they are able to take early action to manage operator load and other resources.

TasPorts also benefits from the option to utilise Rapid Recall on a choice of one or more channels, where previously only all-channel Rapid Recall was possible. Combined with easy-to-manage and on-the-fly updating using the centralised server system, TasPorts reported a smooth transition with minimal downtime.

The transition to a new high-tech dispatch system was seamless and much of the install was carried out by TasPorts with help from Omnitronics. As the system is COTS VM based, the TasPorts IT team retains a high level of self-sufficiency in supporting its user requirements and expanding for future needs.

The federal government and private companies are investing in new Australian-controlled satellite...

Don't get caught out working in ceiling spaces