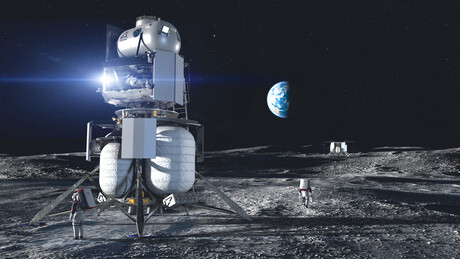 NASA is going back to the Moon this decade, and it will be taking a Nokia LTE communications network along for the ride.

Humanity’s relentless endeavour to push the boundaries of space exploration is well documented. From crewed missions to probes speeding their way to the farthest corners of the Solar System and beyond, the thirst to discover the secrets of the Universe have never been as resolutely demonstrated as they are now.

To that end, the need for advanced and resilient space communications equipment cannot be understated as space agencies around the world race to reach for the stars. Nokia, a pioneer of wireless and networking technologies, will be celebrating the new decade with an ambitious project after it was selected by NASA to build the first-ever cellular network on the Moon.

Nokia will be developing groundbreaking technologies by deploying an LTE/4G communications system on the lunar surface, helping to pave the way for a sustainable human presence on the Moon. The contract awarded to Nokia is part of NASA’s Tipping Point program, which fosters the development of commercial space capabilities and will benefit future missions. NASA plans to leverage these innovations for its Artemis program, which will establish sustainable operations on the Moon by the end of the decade in preparation for an expedition to Mars.

Thierry E Klein, Head of the Enterprise and Industrial Automation Research Lab at Nokia Bell Labs, in the following interview, provided a deeper insight into the ambitious initiative that will witness Nokia’s LTE/4G network provide critical communication capabilities for a range of future data transmission applications.

Nokia and NASA on the Moon

Nokia’s lunar network consists of an LTE base station with integrated Evolved Packet Core (EPC) functionalities, LTE user equipment, RF antennas and high-reliability operations and maintenance (O&M) control software. The LTE base station with integrated EPC functionalities will be mounted on the landing module, while the LTE user equipment will be mounted on a rover or other payloads being deployed outside of the lander. The fully integrated cellular network meets very stringent size, weight and power constraints of space payloads in an extremely compact form factor.

We are delivering a complete end-to-end LTE network that has multiple parts to it. The first part is an LTE base station with integrated Evolved Packet Core network functionality. It’s integrated into a very small, ultra-compact form factor that will go on the lunar lander from our mission partner, Intuitive Machines, along with a passive antenna system.

The second part is the user equipment and an omnidirectional antenna that will be integrated in a rover. The rovers will be transported to the lunar surface and autonomously deployed by the lunar lander. An LTE link will be established between the lander and the rover to provide lunar surface connectivity.

The rover will have two objectives: first to test very close proximity communication up to a couple of hundred metres and second to test longer-range communication with a range of two to three kilometres away from the lander. The final part of the system is a custom-built operations and maintenance software so that the whole system can be monitored and configured from mission control on Earth.

It became evident to us that, for any sustained human presence on the Moon and Mars in the future, connectivity and communications are critical. Astronauts will need the same advanced capabilities that we have on Earth in space to support their activities and run their applications, whether that is enabling voice and video communications capabilities, telemetry and biometric data exchange, sensing applications or controlling robotics.

LTE/4G is well established in terrestrial networks, provides excellent performance and economies of scale, and meets the initial mission requirements. Also, LTE/4G has a well-defined path to 5G.

The Nokia LTE/4G network funded by the NASA Tipping Point program will be deployed on the Moon sometime in late 2022. The mission objective is to deploy the first LTE/4G network on the lunar surface, and the mission duration will last several weeks to prove the network and verify its performance.

The equipment needs to be hardened for environmental stresses such as vibration, shock and acceleration, especially during launch and landing procedures, and the harsh conditions experienced in space and on the lunar surface, including temperature, vacuum and radiation. The equipment also needs to be extremely reliable and the LTE/4G network includes hardware redundancy and sophisticated O&M software that allows us to operate it remotely. Size, weight and power consumption are important considerations for any lunar mission and the system has been specifically designed to meet stringent requirements for this mission.

One of the purposes of the mission is to test and learn about radio propagation on the Moon. The lunar surface has less clutter than Earth since there are no trees, buildings and structures. But at the same time, it has its own characteristics in terms of rock boulders, mountains and craters. Our system has already undergone a series of rigorous environmental and operational tests to verify its performance and reliability, and we look forward to validating these during the mission to advance the technology readiness level of the system.

Nokia has built products to operate in harsh conditions, such as mining installations or industrial environments, that are different from conventional cellular networks. However, the challenges of operating complex electronics and software in space are breaking new barriers, which is part of the spirit of exploration at Nokia Bell Labs. This project combines many different areas of technology that we work on. We continue to learn and optimise our solution at each step along the way.

We’ve always had an intense scientific curiosity that has led to some of the greatest innovations and discoveries known to humankind. The teams at Nokia Bell Labs have always found inspiration in the amazing lunar research conducted by the scientific community, and we are very excited to work with NASA and be part of such an important mission.