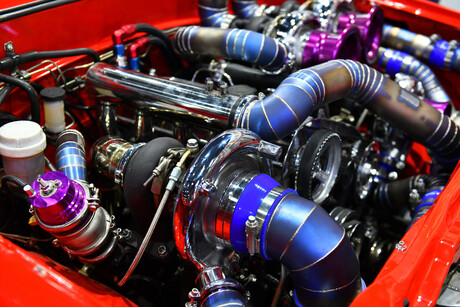 The history of technology is characterised by innovative tools that have radically transformed the way we live, work and socially interact.

From the steam and water engines of the first industrial revolution, to the microprocessor hallmarks of the digital revolution, up to the information age where radio spectrum is used as a vehicle to transmit data and energy — each era has developed its engines to transform material, energy and, most recently, knowledge and information.

As we move forward towards the next wireless industrial revolution, radio spectrum is a key enabler within the information age engine.

Figure 1: Periods of the technological revolution.

The need for information

There is no doubt that information technology has a great impact on the way we communicate, learn and think. Access to information immediately and everywhere plays an important role in everyday life.

Especially now in the times of a pandemic, our reliance on this technology increases even more. Between February and April 2020, internet traffic surged by nearly 40%, mobile network traffic by 50%; there is no sign this trend will slow down soon.

Information connects people, but also objects. Forecast shows more than 29 billion networked devices by 2023 with machine-to-machine (M2M) connections representing half of the total. This type of communication needs to rely on a high transmission speed and a low latency to enable mission-critical applications.

Self-driving cars and advanced driver-assistance systems are great examples of the importance of transmission speed and latency. When it comes to connected driving, data must be transmitted and analysed in real time because decisions must be made in fractions of a second so the vehicle can stop before hitting an obstacle, or act to ensure passenger safety. High transmission speed can save lives and make driving safer.

Moving up to mmWave

The radio spectrum span is part of the electromagnetic spectrum with frequency from 30 to 300 GHz. Until recent time, the frequencies used for communication purposes were limited to the microwave band, typically defined to cover the 3–30 GHz range. The majority of the commercial wireless networks use the lower part of this band — between 800 MHz and 6 GHz, alias the sub-6 GHz band.

This means the 3G/4G/5G cellular connection on your smartphone, your home Wi-Fi, the Bluetooth connection on your wireless headset, plus almost anything you can think of, will use those frequencies to transmit information. This represents the main critical challenge of today’s wireless network.

While the number of users and devices consuming data increase exponentially, the radio spectrum frequency band available by the telecom carriers is unchanged. This means that each user is allocated a limited amount of bandwidth, leading to slower speeds and frequent disconnections.

One way we may solve this problem is to transmit signals on bands where spectrum is readily available. The millimetre-wave (mmWave) band is particularly interesting, due to a huge amount of under-utilised bandwidth that lies in this part of the electromagnetic spectrum.

Key advantages of mmWave include frequency reuse and channel bandwidth making this band particularly suited for multi-gigabit mobile communication systems and high-throughput satellites. Also, components working in the mmWave bands are more compact and smaller in size, making them particularly useful in a scenario where we have a high density of devices operating simultaneously and in close proximity.

Those advantages make mmWave technology the way to boost the performance of our data transmission: the turbo engine of the information age.

Let’s explore four use cases where mmWave technology is the key enabler.

Figure 2: Four use cases of mmWave technology with indication of frequency coverage and signal bandwidth.

Multi-gigabit connectivity: fulfil the need for capacity and speed

Satisfying the demand of high-quality services for the greatly increasing subscribers accessing the mobile cellular network is essential for network operators.

The sub-6 GHz cellular bands, in use on today’s latest communication systems, are extremely crowded and fragmented. Therefore, to meet the expected and desired data throughput, high frequency bands in the mmWave range need to be adopted in a way to accommodate more users in a spectrum section still free of interferences and not yet allocated.

The mmWave bands give new estate and large information bandwidth allowing data transfer rates up to 10 Gbps. This speed is comparable to optical fibre and a hundred times faster than the current 4G technology.

More users and more connections mean stress on the network. While we assume the air is used as a wireless transmission medium and does not have bandwidth limitation — it does.

If the number of connections increases and the network does not adapt to this new need, our life will be as if we are in a big stadium attending a football game and not able to call or message our friends due to the overwhelming number of users that want to do the same things, at the same time.

New technologies like 5G or Wi-Fi (802.11ay) are designed to overcome those challenges and guarantee what is defined as ‘great service in a crowd’.

Millimetre wave characteristics are, for instance, important to tackle this challenge. Due to the properties at high frequencies in relation to the atmospheric absorption, as you move to higher frequencies, transmission range gets shorter.

Millimetre waves allow close-range communication up to 100 metres, rather than kilometres. In this scenario, frequency can be reused allowing simultaneously operating networks that do not interfere with each other.

In the past two years, multiple commercial satellite operators have begun launching high-throughput satellite (HTS) constellations. These next-generation satellites will be able to provide far more throughput, of up to 400%, compared to conventional fixed, broadcast and mobile satellite services.

This significant increase in capacity is achieved by using a ‘spot beam’ architecture to cover a desired service area, as in a cellular network; in contrast to the wide beam used in traditional satellite technology.

This architecture benefits from a higher transmit/receive gain, permitting the use of higher order modulation, so to achieve higher data rate. Also, being a service area covered by multiple spot beams allows operators to configure several beams to reuse the same frequency band and polarisation, boosting capacity where it is needed and requested.

Automotive radar is the most reliable technology at detecting an object’s distance (range) and motion, including velocity and angle in almost every condition. It uses reflected radio waves to detect obstacles behind other obstacles and has low signal processing requirements.

Automotive radar sensing technology, mainstreamed by the 24 GHz narrow band sensors, is now rapidly evolving towards the high frequency 76–81 GHz band and the wide 5 GHz bandwidth, offering a superior range resolution and immunity to obscurants such as fog and smoke. The magnitude of improvement delivered by the higher frequency and wider bandwidth automotive radar systems in range resolution is significant, because the errors in distance measurement and minimum resolvable distance are inversely proportional to the bandwidth.

Another advantage of the transition from legacy 24 GHz to 79 GHz systems is the gain in size and weight. With the wavelength of 79 GHz signals being a third of a 24 GHz system, the total area of a 79 GHz antenna is one-ninth of a similar 24 GHz antenna. Developers can use smaller and lighter sensors and hide them more easily for better fuel economy and car designs.

Extended reality: the beginning of a new age

Extended reality (XR) is an emerging umbrella term that encompass all the immersive technologies. The ones we already have today: augmented reality (AR), virtual reality (VR) and mixed reality (MR) plus the area interpolated among them.

XR will have exciting applications in diverse fields such as entertainment, medicine, science, education and manufacturing, changing the way we see and interact with the world around us, real or computer-generated.

While VR and AR applications already exist in the market, the adoption rate is slow with the main reasons being bandwidth and latency. Today’s wireless networks place serious limitations on those applications, such as latency and capacity, which can negate the user experience entirely.

Millimetre-wave technology, as implemented in 5G thanks to the increased transmission bandwidth and low latency, will strengthen existing experiences and enable novel ones, paving the way for mass adoption.

However, to provide a truly immersive AR, at least a tenfold increase in data rate is needed. Thus, posing major challenges for the actual 5G technology. However, technology keeps innovating and this time, the radio spectrum will be pivotal to tackle those challenges. 6G will be the sixth generation of wide-area wireless technology, expanding the availability of frequency bands to terahertz (THz) bands, above the mmWave frequency range where 5G operates.

Holographic communication, tactile internet and fully immersive virtual/augmented reality are among other applications that this future technology will make possible and, once again, mmWave is the engine of this change.

Probably the trigger of the beginning of a new age, where creativity and imagination will hold a central spot in our existence.

Giovanni D’Amore is the director of product marketing at Keysight Technologies. Prior to that, he has held numerous marketing, business development, and applications support positions across several product lines with Hewlett-Packard, Agilent Technologies, and now Keysight Technologies. Giovanni is an engineer with a M.Sc. in electronic and telecommunication from the University of Palermo, Italy and authored several articles around microwave measurement techniques.  He is a regular speaker at microwave conferences such as IMS and EuMW.

Only a prototype but it is intended to make it easy to use for emergencies.