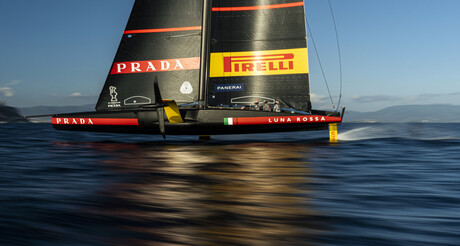 When flying on top of the water at over 50 knots in speed, communications on a boat like the America’s Cup AC75 are not that simple.

The feeling is comparable to that of a motorcycle travelling at 100 kilometres per hour. Wind, noises and vibrations from the hull and rig are all elements that disturb the communication flow. The position of the crew members in the boat also makes hands-free communication challenging.

At the recent America’s Cup in Auckland, New Zealand, onboard the Italian challenger Luna Rossa, the only sailor who moved from one side of the boat to the other during manoeuvres, passing around the stern, was mainsail trimmer and strategist Pietro Sibello. Both skippers, Australian-born Jimmy Spithill and Italian Checco Bruni in their alternating roles of helmsmen and flight controllers, did not move from their positions; nor did any of the other eight sailors.

The crew is positioned in two ‘corridors’, separated by the soft wing that creates a longitudinal barrier between the two sides of the hull and prevents the crew on one side from seeing what happens during the manoeuvres on the opposite side. The distance between the first man at the bow and the last one at the stern is about 15 metres, a condition that makes it virtually impossible to communicate without specific aids.

All manoeuvres are called and must be executed in a matter of seconds; two yachts approaching each other at 50 knots, for example, will close at approximately 100 metres every two seconds. It was essential, therefore, that each crew member received clear and precise information simultaneously.

For this reason it was necessary to develop an advanced intercom system for onboard communication on the AC75 that was also linked with the support boats. The system is housed within the helmets of each sailor, fitted with sophisticated microphones and earphones.

The crew interacts within the boat and with the support fleet on a single radio channel. Everyone onboard can listen, but only a select few can use the microphone. Operations Manager Gilberto Nobili was also enabled for this function, as he provided the afterguard with the information displayed on the racing software, such as the approach times to the starting line and to the laylines.

During training and sea trials, the team members on the support boats communicated with the sailing team — in particular, the coach, technicians and engineers monitoring the data from the bank of sensors mounted on the AC75, plus listening to the comments from the sailors through their headphones and interacting with them.

During the racing regattas, the rule prohibited any kind of external assistance, so intercoms of the support boats were disabled a few minutes before the start until the end of the race. Team support assumed a listen-only mode.

All boats competing could only communicate with the race director for information related to the race and with the umpires, the judges who supervise the regatta, to acknowledge any protests and penalties assigned. On Luna Rossa, Checco Bruni and Jimmy Spithill were the crew tagged with that responsibility.

As for all elements of the AC75, the communications system also required a lengthy and complex process of analysis, design, development and implementation. Delicate components needed to function properly in an environment subject to rapid deterioration as it was in contact with the corrosive saline properties of sea water.

Features such as lightness and wearability, combined with the need for an efficient instrument even in extreme conditions, made the design of these instruments even more challenging. The development of the hardware took over three years of work and numerous devices were tested: microphones, cables, connectors, earphones, speakers.

The goal was to capture and distribute a clear sound, free of any external interference tied to the screaming wind, turning winches, movement of foils and all the sounds that are heard when flying at maximum speed on a carbon-fibre foiling yacht.

The final product was a hardware device with performance that excelled, where several elements were assembled and integrated into the helmet. The comms system was designed to be encased in a custom-built ergonomic slot, with specific comfort and aerodynamic characteristics, to be an integral part of the helmet used by the sailors.

Both the design and the production of the custom-made cases were conducted in-house at the marina base with the aid of the team’s 3D printer. Like all the components that make up an AC75, meticulous research had also been carried out on the communication system to reach quality standards of the highest level. The ability to communicate on board in a clear and clean way is essential to achieve racing results. 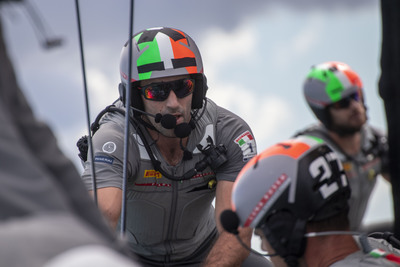 The sailing team used the Vokkero Guardian Staff product range, a hands-free communication system, light, easy to use and requiring no installation. The system could be adapted to the technical constraints of the official competitions. Secure and clear communications, even in the noisiest environment, were enabled due to a patented noise filter. All the staff were in permanent contact through the ‘group’ function allowing the coaching team and the medical team to communicate together or separately.

The Guardian Staff radiocommunication kits were released in 2019 for sports teams and are already used by 10 national teams and more than 50 professional football and rugby clubs worldwide. Since 2016, the Vokkero teams have also developed a specific range of product to meet the constraints for industrial markets: ATEX zones, civil and military security, nuclear, railways, construction and public works, noisy industries and more.

The TA-430 communications device from ToooAir provides Australia-wide coverage on the 3G/4G/4GX...

$211 million in scam losses this year