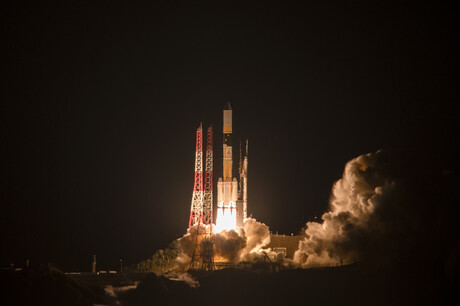 Launched by Mitsubishi Heavy Industries from Japan on 22 December last year, the I-6 F1 will deliver enhanced ELERA (L-band) and Global Xpress (Ka-band) for the Indo-Pacific.

The Inmarsat-6s (I-6) are Inmarsat’s first ever hybrid L- and Ka-band satellites, incorporating increased capacity and technology for ELERA’s L-band services alongside additional Global Xpress (GX) high-speed broadband capacity. Adding to an existing global fleet of 14 geostationary satellites they extend Inmarsat’s commitment to mission-critical services, the first of seven planned for Inmarsat by 2024.

The satellite is comparable in size to a London double-decker bus, with a deployed solar arrays ‘wingspan’ similar to a Boeing 767 and a nine-metre-wide L-band reflector. The satellite will then be raised to geostationary orbit approximately 36,000 kilometres above the Earth via its all-electric propulsion system and undergo an extensive testing program. It will enter service in 2023. Ground stations in Western Australia will support Inmarsat.

The satellites, like all Inmarsat ELERA and GX spacecraft, are backward-compatible with existing terminals, ensuring that current and future customers will continue to benefit from new advances.

The satellites also increase capacity of the network available to ELERA customers with double the beams, 50% more spectrum per beam and double the power of the I-4s, to support the growing need of commercial and government customers for data, particularly in congested regions or hotspots where it is needed most.

It is suited for use in RF transceiver devices at 5G mmWave bands, such as 28 GHz and 39 GHz.

Objective is to maximise resolution of any issues in the lab in order to accelerate deployment at...