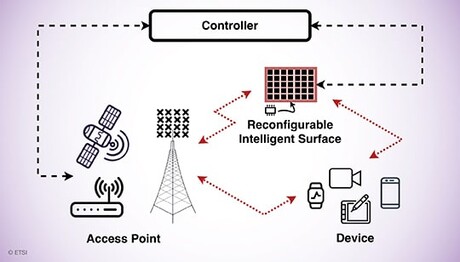 The intent is to leverage smart radio surfaces with thousands of small antennas or elements to dynamically shape and control radio signals.

European agency ETSI has launched an industry specification group on reconfigurable intelligent surfaces (ISG RIS). The group has been created to review and establish global standardisation for RIS technology. The outcome is to improve network performance with cost-effective, low-power and sustainable technology for future wireless systems.

RIS is a new type of system node leveraging smart radio surfaces with thousands of small antennas or metamaterial elements to dynamically shape and control radio signals in a goal-oriented manner. The technology will effectively turn the wireless environment into a service, inspiring a host of new use cases.

These include enhancing key performance indicators for various systems such as coverage and capacity, as well as enabling new applications such as localisation and sensing. As an example, an RIS can reconfigure the radio environment to sense human posture and detect someone falling, a useful application for elderly care.

RIS, thanks to its associated characteristics, is expected to serve as a key technology in future wireless systems, including for 6G.

Reconfigurable intelligent surfaces can be implemented using mostly passive components and, as such, the cost to produce, deploy and operate RIS may be lower compared to fully stacked cells relays. RIS can be potentially deployed for both indoor and outdoor usage, including offices, airports, shopping centres, even lamp posts and advertising billboards. They may take any shape or be integrated into and onto objects. Additionally, the characteristics of RIS may result in low energy consumption, making it a sustainable, environmentally friendly technology solution.

RIS can be configured to operate at any part of the radio spectrum, including frequencies from sub-6 GHz to THz, and may use tools from artificial intelligence and machine learning (AI/ML) to enable systems operation and optimisation.

While extensive research efforts continue around RIS (also known as reflecting intelligent surface, large intelligent surface, smart repeater and holographic radio), global standardisation remains in its early stages. ETSI’s ISG will work towards defining use cases, covering identified scenarios and clearly documenting the relevant requirements with a view to paving the way for future standardisation of the technology.

“There are, however, many technical challenges that need to be adequately addressed before RIS can be adopted into future standards, towards commercialisation of the technology, and the ETSI ISG RIS aims to identify and address some of these challenges,” said Arman Shojaeifard, Chair of ISG RIS.

Reconfigurable intelligent surfaces will be a real value-added technology for services that will benefit society at large.