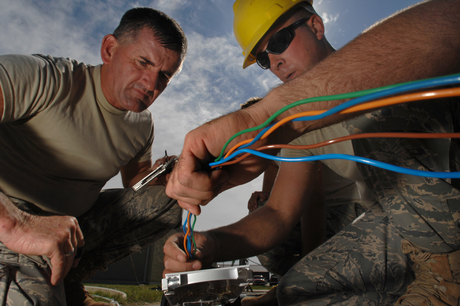 In 2012 the ITU (International Telecommunication Union) predicted that in 2015 the number of networked devices will be twice the global population, and that there will be as many as 25 billion devices online by 2020 as the Internet of Things (IoT) revolution takes off, and the proliferation of technologies such as machine-to-machine communications will be the primary driver of the growth.

A great deal of what is, and will be, driving this growth is the ever-increasing number of connected devices equipped with the IP protocol. Among non-domestic device deployments, common types of technologies have included CCTV cameras, as well as telecommunications infrastructure devices such as Wi-Fi access points (APs) and small mobile device cells. For example, in 2014 the number of IP-enabled CCTV cameras began to exceed the number of legacy analog cameras.

As the costs come down, more and more organisations are deploying such IP technologies. Deployment of CCTV cameras and Wi-Fi devices, for example, are easy enough to do when the you own the infrastructure where it is being deployed, or where distances are not too great – for example, in a single plant, building or campus where all the necessary infrastructure is available. Challenges arise however, when the end device is located more than 100 m from the nearest data switch, or is located on somebody else’s building or in a public space where electrical power for the end device is not readily available.

In short, there are three situations that can be challenges for remote device deployment:

The owner of the device must negotiate access to local power with building owners. Some building owners want the device owner to put electrical meters on the power circuit for bill payment purposes. Even without the need for meters however, the negotiations about access to power can take weeks or months, requiring considerable planning and design. Once access to power is negotiated, electricians must be deployed to the site to bring power to the device or cluster of devices. In many instances, such as in public parks, there may be no electric power available at the required site at all.

It is also recommended in the Ethernet standards that devices at each end of an Ethernet data circuit do not have different mains earth connections, since earth loops can occur that can induce interference currents on the data cable. Designing and deploying such a system requires care, particularly if shielded cables are used.

If the power can be delivered remotely along-side or within the data cable, then the problem of sourcing power, and therefore the overheads and costs of deployment are reduced considerably.

The PoE 802.3at standard can provide up to 25.5 W of power to end devices on Cat 5 cable (or higher). To provide power for PoE, the Ethernet switch must have an additional power supply delivering typically 1480 W solely for PoE ports.

The main advantage of PoE is that it supplies power and connectivity over one cable as long as the remote device is designed to accept power in that manner. APs and IP cameras are often set up for PoE. A disadvantage is that it must be done over standard Ethernet shielded or unshielded twisted pair cable, so it precludes using fibre, which is needed for some high-bandwidth applications.

A powered fibre cable combines single mode or multimode fibre along with a copper power cable. The complete cable system includes a rack-mounted power and optical fibre termination point, the cable, and a remote termination node for each device that plugs into the cable. The system uses plug-in electrical connectors.

In a powered fibre system, each cable is capable of powering a 25 W device, although much higher power is possible on shorter cable runs. The remote termination unit includes a media converter that allows the powered fibre cable system to be used for PoE.

The system incorporates DC/DC conversion technology to eliminate DC line powering calculations, and it features primary, secondary, and tertiary electrical protection for use in harsh outdoor environments as well as indoor venues.

Deployment of devices in outdoor environments, and at remote buildings, can present additional challenges.

PoE uses copper cable. Delivering the power to the remote device from a central point not only eliminates having to install power at the remote end, but also eliminates the ‘floating earth’ problem described above. However, because PoE runs over copper cable, it is still subject to picking up electrical interference and other induced currents, such as surges caused by nearby storm activity, providing a risk to sensitive electronic equipment at both ends of the cable.

Surge protection devices should be fitted, and if shielded cable is used it must be earthed only at the source end, to eliminate earth loops caused by the shield.

Fibre improves surge immunity. Optical fibre cable is usually specified where noise and surge immunity needs to be guaranteed. Working on the principle of light propagation, it is not subject to having currents induced from nearby magnetic fields or lightning. This is why it is typically specified for outdoor Ethernet communications, particularly where large interference sources are prevalent such as in many industrial plants or around electrical substations.

Powered fibre provides the essential noise immunity on the data-carrying fibres. The power conductors can be protected with surge protection devices.

When using powered fibre however, the possible distance is increased to a kilometer for the data over multimode fibre. To support this, each cable is also capable of powering a 25 W device, giving the system much farther reach than PoE systems. Powered fibre systems using single-mode fibre can be extended even further.

For distance of greater than 100 m, and where remote device power may not be readily available, powered fibre provides an excellent solution, being robust, interference-free, and supporting much greater distances. There are many scenarios where powered fibre technology can be of great assistance in deploying remote devices.

In airports, and industries such as oil and gas, electricity distribution, chemicals, wastewater, refining and mining, the use of wireless is increasing, but in some cases, it is either unreliable or too risky from a safety or security perspective. For example some parts of the wireless spectrum are not permitted to be used around airports, and in some industrial environments, the interference is too great, or the cyber-security risk of Wi-Fi is considered too high. Powered fibre provides an elegant solution in these situations.

Car parks, transport and public recreation areas such as parks and shopping malls also provide suitable environments where powered fibre can be of assistance. Many city and municipal councils, as well as law enforcement agencies, are now increasing their CCTV presence in public areas. Many city councils are also providing free Wi-Fi services in public areas. Powered fibre gives these organisations the opportunity to deploy their technology without having to negotiate electrical power issues with building owners, and to increase the number of end devices due to the higher bandwidth that powered fibre provides.

TE Connectivity (TE) supplies all elements necessary to support powered fibre deployment. TE’s hybrid copper and fibre cable can currently be supplied in one- and two-fibre versions, either single mode or multimode. Versions with up to 12 fibres will be available in the future. The power conductors in the cable can be either 12 AWG or 16 AWG, and there are versions with sheaths suitable for both indoor and outdoor applications.

TE has partnered with GE Critical Power to supply the head end SELV power supply, which is a rack mount unit with a modular design, supporting up to four modules of eight power circuits each, for a total of 32 circuits per unit. Each circuit is limited to 100 VA at 60 VDC maximum. Complying with IEC 60950.1, these units allow the cabling to be deployed conduit-free, and a licensed electrician is not required for installation.

The management of the head end wiring is important. TE can supply rack mount combiner panels to allow the separation and management of the power and fibre elements of the cable, providing a fibre splice tray with front-facing fibre connectors and copper terminal blocks for the power connections.

Where PoE devices must be supported at the remote end of the powered fibre, a PoE extender designed for outdoor use with an IP67-sealed enclosure with full surge protection is available. The PoE extender is a full Ethernet media converter with a PoE+ RJ45 output.