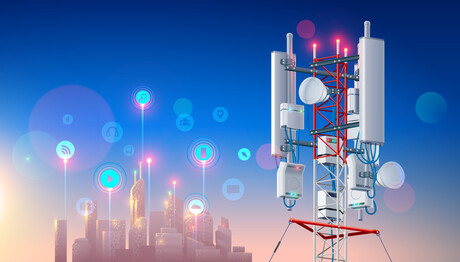 Birmingham scientists have revealed a new beam-steering antenna that increases the efficiency of data transmission for ‘beyond 5G’ and opens up a range of frequencies for mobile communications that are inaccessible to currently used technologies.

Experimental results, presented at the 3rd International Union of Radio Science Atlantic/Asia-Pacific Radio Science Meeting, show the device can provide continuous wide-angle beam steering, allowing it to track a moving mobile phone user in the same way that a satellite dish turns to track a moving object, but with significantly enhanced speeds.

Devised by researchers from the University of Birmingham’s School of Engineering, the technology has demonstrated improvements in data transmission efficiency at frequencies ranging across the millimetre wave spectrum, specifically those identified for 5G (mmWave) and 6G, where high efficiency is currently only achievable using slow, mechanically steered antenna solutions.

The device is fully compatible with existing 5G specifications that are currently used by mobile communications networks. Moreover, the new technology does not require the complex and inefficient feeding networks required for commonly deployed antenna systems, instead using a low complexity system which improves performance and is simple to fabricate.

The beam-steering antenna was developed by Dr James Churm, Dr Muhammad Rabbani and Professor Alexandros Feresidis, Head of the Metamaterials Engineering Laboratory, as a solution for fixed, base station antenna, for which current technology shows reduced efficiency at higher frequencies, limiting the use of these frequencies for long-distance transmission.

Around the size of an iPhone, the technology uses a metamaterial, made from a metal sheet with an array of regularly spaced holes that are micrometres in diameter. An actuator controls the height of a cavity within the metamaterial, delivering micrometre movements and, according to its position, the antenna will control the deflection of the beam of a radio wave; effectively concentrating the beam into a highly directive signal and then redirecting this energy as desired, while also increasing the efficiency of transmission.

The team is now developing and testing prototypes at higher frequencies and in applications that take it beyond 5G mobile communications. University of Birmingham Enterprise has filed a patent application for this next generation beam-steering antenna technology and is seeking industry partners for collaboration, product development or licensing.

The solution may be under their feet.

The US Navy has partnered with a startup micro-satellite operator to track ship movements from...