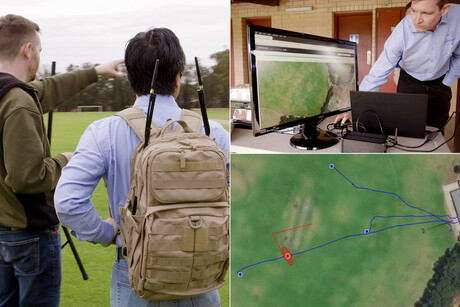 Traditionally, cellular 4G would be used for networking to demonstrate geolocation capability, but that has limitations as the infrastructure is not always readily available. A BlueM network is a self-forming and self-healing network made up of BlueBottle radios, each one integrated with a transmit–receive module and an antenna, using Solinnov’s Halite orthogonal frequency-division multiplexing waveform.

Solinnov plans to continue to enhance the network to be immune to electronic warfare, making it harder to detect, geolocate and jam. There are also plans to extend the capability to become an adaptive radio that optimises to the operating environment.

The C4 Edge program is an Australian Army-sponsored sovereign industry initiative involving more than 20 Australian businesses across the country. Initiated by army in 2019 to understand the breadth of local C4 industry capability, the program has progressed to the design, development and manufacture of a sovereign Battlegroup and Below Battlefield Command System prototype for demonstration in the coming months.

Any acoustic object can be located with this filter element, especially in the wearer’s...