Tracking down an intermittent source of interference has safeguarded operations at a busy airport.

All airports need clear, reliable radiocommunications in order to operate efficiently and safely. But at one particular Australian airport — which has more than 100,000 aircraft movements each year — air traffic controllers in the control tower had experienced, over a long period of time, interference on aircraft radio channels.

Previous attempts to locate the source of the interference had proved futile due to its short-term duration and spasmodic occurrence; typically it would be observed for only a few seconds at a rate of less than once per day.

Vicom provided the necessary engineering expertise together with nodes and software (manufactured by CRFS) to locate the source of interference and enable the airport to eliminate the problem.

A scanning rate of twice per second was used, and data was captured over a one-month period. The timing of interference events was noted by the control tower operators. The collected data was then analysed for events at the times reported.

Using the analysis software it was possible to look at the spectrum at one-second intervals and match these with the timing of audio recordings of voice radio traffic. It became clear that the source of interference was external to the equipment room. 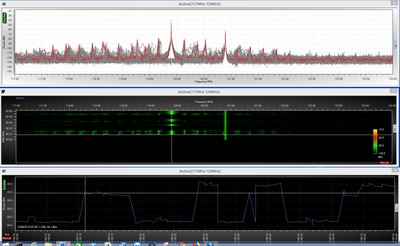 Screenshot of spectrum, waterfall and integrated power data displays used to identify the source of radio interference at a busy Australian airport.

Several sources were identified. Some were illegally operated devices being used by workers in the area, but the majority were caused by aircraft transmitting on one frequency and producing spurious emissions on, or close to, other control tower frequencies. It was possible to recognise the interference signature of aircraft and relate these to the aircraft call-signs. The transmissions from both the tower and aircraft could be clearly identified.

Key factors in achieving this result were:

As a result of the finding, remedial action was focused on cleaning up the transmissions from the particular aircraft identified.

Analysing the network activities of wireless devices can provide important information about...