Here are the basics of four measurements you can perform on the go — RTSA, noise figure, CAT and OTA.

Microwave systems frequently encounter sources of interference, ranging from cellular systems and satellite ground stations to microwave backhaul systems that can lead to poor signal quality. This can include a dropped cellphone call or poor audio quality. Wireless communication systems often operate under a limited amount of regulated radio interference due to limitations of the radio frequency spectrum.

An engineer working in the field conducts routine maintenance on and troubleshoots deployed RF, microwave and millimetre-wave systems. On any given day, you may need to measure a wide variety of devices or signals: cables, antennas, communications systems or intermittent spurious signals, to ensure robust signal quality and uninterrupted service.

To perform these functions successfully requires a basic understanding of measurements and a portable, easy-to-use handheld instrument. This article will outline four common measurements you can perform in the field: real-time spectrum analysis (RTSA), noise figure, over-the-air (OTA) testing and a cable and antenna test (CAT).

Signal interference over wireless networks is on the rise, resulting in poor signal quality. This has a profound impact on wireless devices and communications ranging from car radios to mission critical applications such as public safety. In a highly dynamic signal environment, weak signals can be masked by wider or longer duration signals. Interference may also occur during a spectrum analyser’s dead time. Gapless RTSA techniques reveal these transient, overlapping signal detections.

Co-channel interference detection and troubleshooting is the most challenging task in a communications network because interferers can be hidden under the serving frequency. Typically, a user has to turn off the carrier transmitter to find any other signals that appear in the same frequency channel before eliminating or reducing their impact.

This tends to be very intrusive and can disrupt normal communication services. Under many circumstances, turning off serving transmitters is not a viable solution, depending on the nature of the services, such as base station testing. RTSA profiles OTA characteristics, being able to detect hidden interferers under the serving carrier.

RTSA also helps with interference detection, given the widespread use and proliferation of wireless technologies. 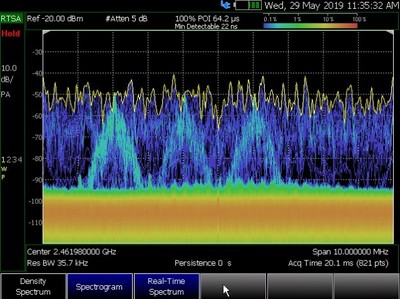 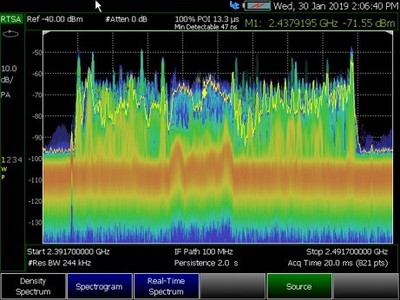 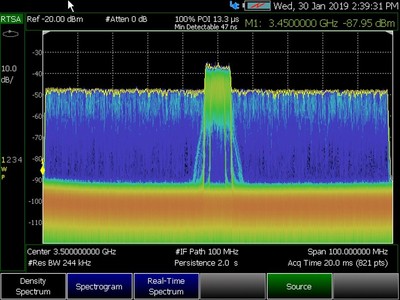 Noise figure measures the degradation of the signal-to-noise ratio, as a signal passes through an active or passive device. Noise figure uniquely characterises entire systems in addition to their components, including the pre-amplifier, mixer and IF amplifier. By controlling the noise figure and gain of the components, the designer controls the noise figure of the overall system. Once you identify or know the noise figure, you can easily estimate system sensitivity from the system’s bandwidth.

Communication system capacity is limited by internally generated noise. This noise will reduce link budget, increase investment on the transmitter side or increase antenna cost at the receiver side. One key performance indicator for a receiver is its sensitivity; the ability to reliably discern small signals close to the noise floor. While vector network analyser (VNA) S-parameter and spectrum analyser channel power and adjacent channel power measurements focus on signal behaviour, the performance of a communication system is based on signal-to-noise ratio. To get a complete picture of total system performance, you need an additional evaluation of internally generated noise. Lower noise figure values typically mean better device performance.

Nearly 50 to 60% of cellular base station problems are caused by faulty cables, connectors and antennas. The failure of these components causes several issues, including poor coverage and unnecessary handovers in cellular systems. Cable and antenna measurements verify and troubleshoot RF/microwave transmission systems and antennas. These measurements are typically made along the coaxial cable, connecting a transmitter to its antenna, or between an antenna and its receiver. A CAT identifies the location of poor performance in adapters and damaged antennas, as well as breaks or bends in cable lines.

Failure in cable system transmission lines due to exposure to harsh weather conditions is a common maintenance issue. Sheltered cable installations can expose components to heat, stress and oils that can leak into the system. Cable faults can occur at any interface between cables and connects where soldered joints and crimps in the cable weaken and break. 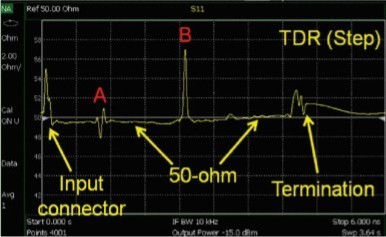 Figure 3. Points A and B show where the cable is damaged or bent in the TDR mode for cable and antenna testing.

Wireless networks have become increasingly complex with 4G and 5G looming on the horizon. One major challenge is the question of what network coverage really is, since today’s wireless networks are comprised of layers of macrocells, microcells and picocells. With users shifting between LTE and 5G, defining wireless coverage can become complicated and difficult to troubleshoot. OTA testing assesses the level of cell coverage needed to ensure continuous connectivity in various mobile communication scenarios, including voice coverage, text messages and data services.

OTA antenna testing in the field is the best way to verify that each cell has sufficient neighbours for successful handovers. With OTA measurements, you can scan an area to determine how many cells are available, identify which cells are good neighbours or troubleshoot handover problems, such as missing neighbours.

This is an edited version of a much more detailed Keysight whitepaper that explores the capabilities of the FieldFox handheld analyser. The full white paper is available at http://literature.cdn.keysight.com/litweb/pdf/5992-3772EN.pdf

Analysing the network activities of wireless devices can provide important information about...