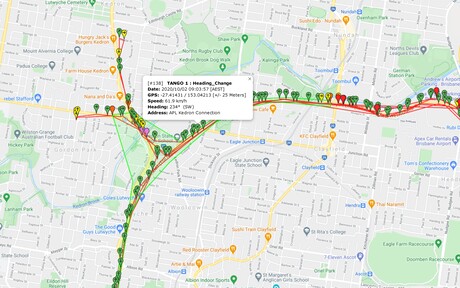 Tunnel Network Services (TNS) provides incident response and maintenance for Transurban Queensland’s (TQ) network of tolled roads and tunnels in Brisbane. TNS has been using push-to-talk over LTE (4G) for its operational communications on the road for more than three years.

The organisation’s Android-based PTT devices used for two-way communications and GPS tracking could only track staff when they were above ground. This meant that to pinpoint a worker’s location while in a tunnel required either a report from the worker or a search of up to hundreds of live CCTV camera feeds. This was the only remote way to find a worker who could not state their precise location, or who perhaps was in distress.

In 2019, TQ installed road navigation beacons in more 18 kilometres of road tunnels as a service to motorists. The beacons enable underground navigation via the Waze app or Google Maps.

The technology has also been implemented in Sydney’s WestConnex M4 East tunnel.

Control room operators can now view the live and historical locations and status of field staff, whether above or below the ground. All this was achieved at zero cost to TNS, as the infrastructure required (road navigation beacons) had already been rolled out for motorists by TQ.

The user devices feature an SOS button which triggers audible and visual alerts in the control room. Automated alarms and worker protection, such as lone worker and man-down, are also supported.

“Prior to leveraging the technology, tracking was based on GPS locations which cut out as units entered the tunnels and did not come back online until they exited,” said Lucas Anderson, Safe Lane Availability Manager.

“Now our incident response teams can be tracked within 25 metres of their location in-tunnel.

“The location of incident response teams is shown on a display in the tunnel control room, which assists with resource selection for individual incidents, based on the closest unit, which helps to reduce response and rectification times,” Anderson added. “This increases safety for both workers and motorists.

“It’s great use of equipment available.”

Work has begun on the Trans-Australian Railway to introduce new rail technology between South...