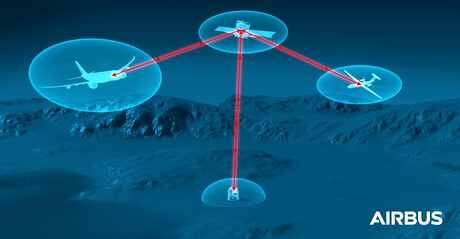 The UltraAir terminal will be capable of laser connections between an aircraft and a satellite in geostationary orbit 36,000 km above the Earth, with a stable and precise optical mechatronic system. The technology demonstrator will pave the way for a future UltraAir product with data transmission rates of several gigabits per second, while providing anti-jamming and low probability of interception.

UltraAir will be able to assist military aircraft and unmanned aerial vehicles (UAV) to connect within a combat cloud.

The first tests will take place at the end of 2021 in laboratory conditions. In a second phase, ground tests will start early 2022. For final verification, the UltraAir demonstrator will be integrated on an aircraft for flight testing by 2023.

Laser links have the benefit of avoiding interference and detection as, in contrast to the already-crowded radio frequencies, laser communication is extremely difficult to intercept due to a much narrower beam. Thus, laser terminals can be lighter, consume less power and offer even better security than radio.

The project required a rugged solution that could withstand heat, cold, salt and motion.

The consortium project works towards a pan-European interoperable mobile broadband project for...

The partnership will support the interoperability, reliability and safety of cellular...